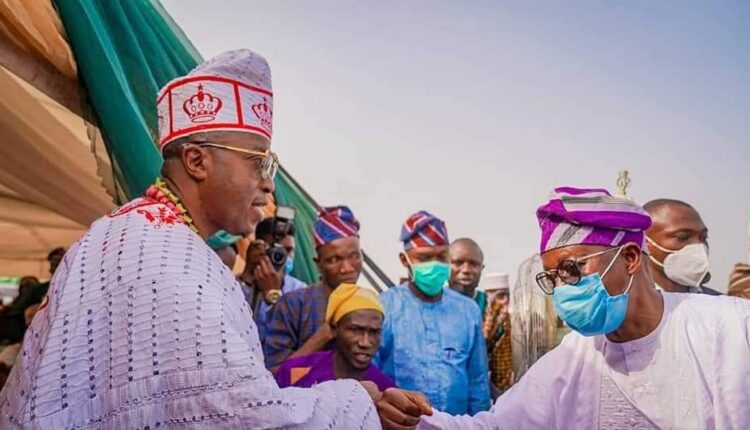 The Oluwo of Iwo, Oba Abdu-Rasheed Akanbi, has commended the Osun State Governor, Gboyega Oyetola for striving hard and for prudently managing the meagre resources of the state, saying Oyetola’s leadership qualities have endeared him to residents across Osun.

The monarch who described Osun as one of the states with meagre resources said that it was commendable that the governor was able to achieve great things with little resources accruable to the state.

Speaking at the Iwo Day held during the weekend, the reverred monarch said that the Oyetola’s administration has convincingly proved its capacity to take Osun to enviable heights ever known in history.

The traditional ruler whose message was based on the development of Iwo in particular and Osun in general, appreciated the spate of development that the ancient town has witnessed in the last three years of Oyetola’s administration.

According to him, I am not a politician and I am not here to campaign for anyone, but going by what Osun is earning as allocation every month, Oyetola is doing excellently well.

“As you all know that I do travel, I was at a place recently where the allocations were being distributed to the states, and to my surprise, just a paltry sum of millions was allocated to Osun where several states were collecting billions of naira.

“What Osun received was nothing to write home about but in spite this, Governor Oyetola was doing wonders, great things as in the payment of full salaries and pensions among other socioeconomic and infrastructural developments.

“As kings, it is part of our responsibilities to pray for the success of the government vis-a-vis the citizenry, and I thank God that good things are coming to Iwo during my reign under the leadership of Governor Oyetola.

“No doubt, all the good things that we are witnessing today like Federal College of Education, have his approval, otherwise, we might not be opportune to have them.

“Oyetola should be congratulated for being awarded the best Governor in Nigeria by notable organisations. Oyetola is a perfect example of what good governance stands for. If someone is doing well, he should be commended.

“I am all out for Iwo come shine come rain and nothing short of it. I can do all possible things to make this town great,” he added.

In his response, Oyetola expressed gratitude to the people of Iwo for their unalloyed support since assumption of office.

He reaffirmed his administration’s commitment to socioeconomic and infrastructural developments in Iwoland and the State in general, just as he pledged to ensure total rehabilitation of Osogbo-Iwo Road soon.

The governor, who used the occasion to appeal to the people to go and collect their permanent voter cards, said that remains the only power to vote for continuity. Oyetola also enjoined the residents of the town to continue to obey the Covid-19 safety protocols.

“Iwo Day celebration is a way of bringing together sons and daughters of the town to discuss issues of development and growth of the town. I commend you for your continued support and I assure you that we will not renege on our promises to bring more developments to the town.

“I am aware that the little efforts we have made are felt by the people, particularly in the areas of health, infrastructure, education, security, agriculture among others. Some of our 332 Primary Healthcare Centres are here for the use of our people so also the intervention on road infrastructure.

“We are not relenting in ensuring the total rehabilitation of Osogbo-Iwo Road just as we have embarked on other intra-city and inter-city roads in Iwoland. Efforts have been geared towards the actualisation of all these as we are committed to the promises made,” Oyetola said.