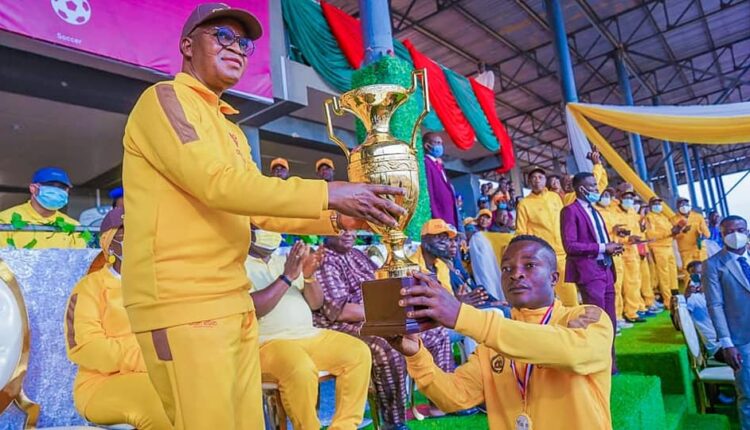 The Osun State Governor, Gboyega Oyetola, has said that his administration’s commitment to sports development was aimed at continuously preaching and spreading the messages of love, unity, hope and development across the state.

He said that the initiative was geared towards engendering peaceful coexistence, sustaining Osun’s status as the most peaceful state in the country and achieving the goal of speedy transformation of the socioeconomic development of the state.

Addressing the participants during the closing ceremony of 2021 Osun Sports Festival at Osogbo City Stadium, Oyetola said that his administration had recorded huge success in its resolve to diversify the economy to non-oil sectors in which the sports had received adequate attention of government.

He said: “Without any iota of doubt, this Sports Festival, which is now culminating into its finals today, is another giant stride by this Administration. It stems from our avowed and determined quest to transform sports and youth development in our State.

“From time immemorial, sports have been used to establish ties and build camaraderie among people all over the world. In line with this time-tested objective, we are employing sports to preach and spread the messages of love, unity, hope and development so that we can continue to sustain our status as the most peaceful State in the country and achieve our goal of transforming our socioeconomic development.

“Sport stands as the cornerstone of our proud heritage and shares unmistakable attributes with our way of life. It has accorded us an avenue to display our creativity and stimulate perseverance, diligence and strong sense of commitment among our people. It has also underscored our belief that sport is a potent instrument for building character.

“As you already know, sports development is one of the major ways to harness and empower our teeming youths. This festival has therefore provided the opportunity not only to engage our youths productively, but to also harness their latent potential for productive engagement.

“I wish to emphasise here that the aim of this project is to institute the State Policy on Sports as enshrined in the State Youth Policy.To achieve the above objective, we have put this together to discover hidden talents in various sports in our Local Government Areas, harness and groom them to stardom. This will eventually boost the performance of the State athletes at various national and international competitions.”

Earlier, the state’s Commissioner for Youth and Sports, Yemi Lawal, had lauded the avowed commitment of Oyetola to youth development in Osun. Lawal who described youths as the most energetic and productive segment of the population praised the administration for investing tremendously in the sector, saying, “It has been the focus of the present Administration under the leadership of our able and dynamic Governor to develop sports at the grassroots.

“We recognise the support of our dear Governor, who feels nothing is impossible to accomplish. Naturally no one believed that this was possible, but it is his belief in us that led us to where we are today.

“Some of the efforts and prompt interventions of the Governor Oyetola-led Administration to turn around the sector are: appointment of 42 Local Government Sports Coordinators, including the Zonal and State Coordinators for a robust coordination of sports at the grassroot; approval and funding of state participation at various sports competitions, including the just-concluded 20th National Sports Festival held in Edo State, “EDO 2020″, despite all the postponements; approval of the compositions and appointments into various Sports Associations in the state; financing the two state teams of Osun United and Osun Babes Football Clubs in their different league; and fencing and renovation of Osogbo City stadium; amongst others”, he added.