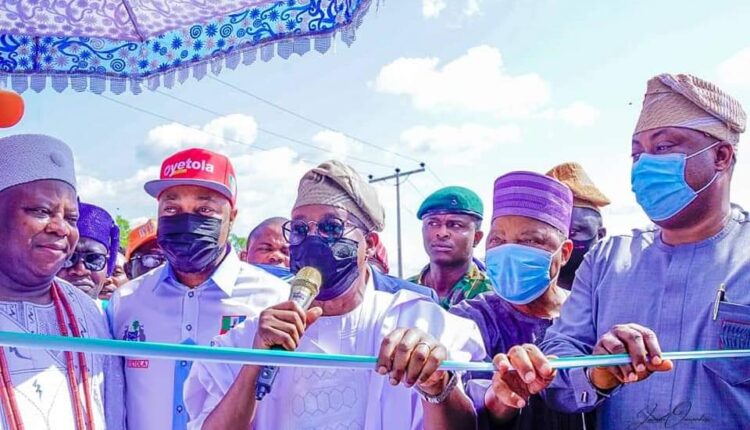 The Governor of the State of Osun, Adegboyega Oyetola, has disclosed that his administration’s goal to deliver adequate, quality and equitable services to the people and in fulfilment of his electoral promises to raise the bar of infrastructure, boost socio-economic activities and stimulate the state’s economy

He added that in line with his commitment, his administration has carried out about 100 road intervention efforts aimed at spreading amenities to every village and town in the long run to provide opportunities for the people, eliminate crime and unemployment, and check rural-urban migration.

Speaking yesterday in Ipetumodu while inaugurating the newly-reconstructed 8.1km Moro-Yakoyo-Ipetumodu-Asipa road in Ife-North Local Government Area of the state after 45 years of construction, the governor noted that the project was government’s efforts to improve the socioeconomic activities of residents in the areas.

Oyetola noted that the reconstruction of the road after decades of its deplorable status has further justified his government’s avowed commitment to giving adequate attention to intra- and inter-city roads so as to facilitate movement of goods and people and as well serve as a catalyst for massive investment in the State.

Oyetola who reiterated the administration’s commitment to road infrastructural development, said that the state under his watch would continue to muster resources to build strategic roads across the State.

“You will all recall that in my Inauguration Speech on November 27, 2018, I did mention that we recognised the importance of intra- and inter-city roads to facilitate movement of goods and people and that we shall continue to muster resources to build strategic roads across the State. You will agree with me that we have kept faith with the above promise.

“Today, the people of Moro, Yakoyo, Ipetumodu and Asipa join the above-mentioned towns and other scores of their counterparts that have benefitted from our resolve to make our people enjoy the good life and socio-economic dividends. The road will offer your farmers and traders the opportunity to transport their produce and goods to the market.

“I must also restate my call for the need for your communities and other towns in the State to engage in community development efforts to provide projects for the people as government alone cannot provide all the facilities every town requires.

“I urge the people of Moro, Yakoyo, Ipetumodu, Asipa and the entire Ife North Local Government to reciprocate government’s gesture by engaging in small businesses and entrepreneurial activities in order to derive personal benefits from our infrastructure development and road construction efforts and boost their personal lives and prosper their families. I must also urge you all to join cooperative societies to further boost your businesses.

“Our goal as a government is to spread amenities, including roads, to every village and town in the long run to provide opportunities for the people, eliminate crime and unemployment, and check rural-urban migration. We believe that the prosperity of Osun lies in the amalgam of the prosperity of all the people, which, if well harnessed, will become channels of socioeconomic development of the State.

“We also believe that every citizen should have the privilege to prosper in any part of the State he chooses to stay. This is the reason we engage in massive infrastructure development to spread opportunities.

“Let me assure the citizens of Osun that we remain committed to equitable distribution of services, including infrastructure. We shall not fail in our duty to continue to provide opportunities and facilities for our people to be gainfully engaged and become instruments of prosperity and development to the State,” Oyetola added.

Also speaking, former Chief of Defence Staff, Lt. Gen. Alani Akinrinade, commended the governor for prudent management of resources and for justifying the confidence reposed in him by the electorate.

“The road was constructed in 1976. Baba Akande had promised to help fix it if he got a second term. So when the community asked me to approach Governor Oyetola to fix it, I couldn’t because I know the State has no money. I am therefore grateful to the governor for fixing this road despite paucity of funds,” Akinrinade said.

In his remarks, the Commissioner for Works and Transport, Hon. Remi Omowaye lauded the administration for taking the welfare and well-being of the people as priority as reflected in the massive infrastructure development aimed at securing the future of the State.

Omowaye said: “we are grateful to God because in spite of the tough economic situation, governance is still possible in Osun. God is helping us to do what is expected of us. Oyetola has earned a number of names owing to his financial prowess, but he has proven himself as a ‘Mr. No abandoned project’.

“The governor has also instructed that we take the measurement of Asipa to Akinlalu and give him a feedback. That is a sign of good things to come.

“If we take the four local governments in Ife, we have done a good number of roads. We may not be loud about it, but work is ongoing. What we have done is unprecedented. There is no where in the country where 332 PHCs were revitalised at the same time. All these calls for thanksgiving. Even the projects we inherited from the previous government, we have mobilised contractors back to site.

“We trust that Osun people are not ingrates. They are seeing what is going on in the State and we know that they will reciprocate the kind gesture. With your support, we look forward to continuity.”