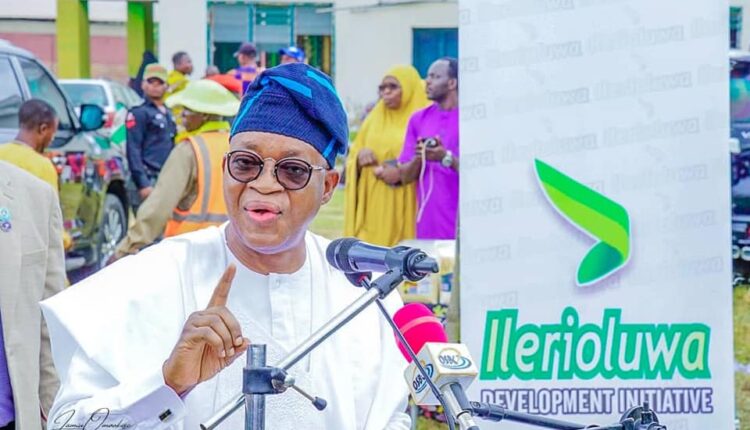 The Osun State Government, Gboyega Oyetola, has restated his administration’s commitment to diversify the state’s economy and that he was committed to making agriculture the bedrock and mainstay of Osun’s socio-economic development.

Aside from the two commitments, the governor insisted that the race to delivering food sufficiency and making Osun the food basket of the region was still on course and that his administration would stop at nothing in achieving its set out objectives.

He noted that his administration had developed a modality to change the narrative, bring the desired change and encourage people’s participation in agriculture, adding that the initiative was to encourage the farmers to get involved in the state’s transformation through a realistic economic diversification process.

Oyetola who spoke while addressing the people, at the presentation of various agricultural commodities to Women in Rural Communities by Ilerioluwa Development Initiative, a Non-Governmental Organisation, noted that the state has set up a committee to coordinate, cultivate and rally the crop and livestock farmers across the state to ensure peace and deliver an enabling environment for farming and peaceful coexistence.

According to him, Ilerioluwa Development Initiative has become a critical part of the IleriOluwa Family, providing welfare, economic and empowerment services to the people and complementing our social investment programme aimed at banishing poverty, hunger and misery in the State.

“I must not forget to mention that this initiative is a welcome addition to the efforts of the First Lady to empower women and girls and make them productive members of the society. Today’s initiative, presentation of vegetable seeds, cassava stem, day-old chicks and other cash crops to Women in Rural Communities at her Women in Agriculture Empowerment, by the Ilerioluwa Development Initiative is unique in many respects:

“One, it complements the goal of our Administration to provide food security and food sufficiency. Two, it empowers women, creates jobs for them and makes them critical parts of our social-economic development programme. Three, it banishes hunger and poverty at the family level across the State as every attempt at empowering women agriculturally, especially across the State, is targeted at feeding the State.

“Four, coming at a time when there are cries of looming food scarcity as a result of insecurity, today’s event is a way of supporting the plan of our Administration to get Osun out of the imminent food scarcity net. Five, the initiative is also a boost to the Federal Government’s Small and Medium Enterprises, which our Administration has imbibed and employed to empower the people. Six, it has set the pace for other groups to join government to empower the people and deliver prosperity to the people,” he added.

The governor, however, urged the beneficiaries of the initiative to make good use of the crops so as not only to ensure that the aim of the initiative is realised, but also to create an opportunity for other women to benefit from the programme.

In her remarks, the Wife of the Governor, Kafayat Oyetola, said that the initiative was designed to serve as a catalyst to revive the lost glory of the agriculture sector.

She said that the organisation has been executing masses-oriented programmes designed to lift people, particularly women from the scourge of abject poverty.

The first lady who described agriculture as the central nerve of existence through which livelihood is guaranteed said that the Organisation would not rest on its oars to ensure that the State actualises its lofty dreams on the agriculture sector.

Earlier, the Commissioner for Agriculture and Food Security, Adedayo Adewole, commended the leadership of Ilerioluwa Development Initiative for their prompt intervention to turn around the fortune of agriculture and make life prosperous for farmers.

Adewole disclosed that over 1, 000 old chicks, 1, 000 cashew seedlings, 1, 000 cocoa seedlings and over 200 bundles of cassava had been set aside to be distributed to women farmers.

The NGO which is owned and funded by the first lady, who doubles as the President of the organisation, was founded to provide welfare, economic and empowerment services to the people and to complement the government’s social investment programme aimed at banishing poverty, hunger and misery in the state.