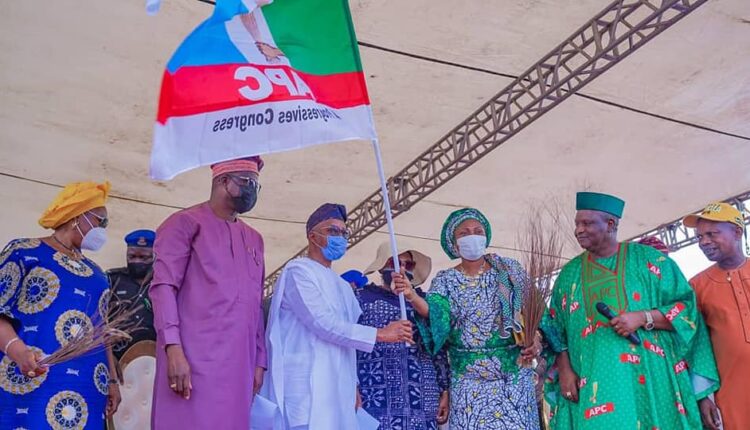 The Osun State Governor, Gboyega Oyetola, has received over 100 Peoples Democratic Party (PDP) members who defected to the All Progressives Congress (APC) ahead of next year’s governorship election across the state.

The governor was joined by his wife and other APC leaders including the Deputy Governor, former Speaker of the House of Representatives, Patricia Etteh, former deputy Governor, Senator Iyiola Omisore, Senate’s spokesperson, Ajibola Bashiru and the party’s chairman, Gboyeha Famodun, among others, to receive the defectors.

The defectors were led by former Special Adviser on Strategy and Planning to former Governor Olagunsoye Oyinlola , Hon. Funmilayo Mustapha.

Funmilayo, who was a former House of Assembly member under the PDP and a former council chairman, led her supporters from the Ila Federal Constituency, comprising Ila, Boluwaduro and Ifedayo and other seven councils in the state, and attributed their defection to the leadership crisis rocking her former party at national and state levels.

She noted that a party that could not fix its challenges could certainly not fix that of the state, adding that Oyetola’s achievements in just three years despite the financial challenges were worthy of emulation.

Speaking at a rally organised to formally welcomed him back to the state at PDP Secretariat, Adeleke advised the governor to begin preparing his handover notes, as he was poised to take over mantle of leadership in the state.

“The ruling party has messed up the state since coming to power. I am appealing to the Governor, Mr Adegboyega Oyetola to start preparing his handover notes because his days as Governor are numbered.

“I am back and ready to kick start my campaign. PDP belongs to everyone, I can’t stop anyone interested in the party’s ticket from contesting it, but l appeal for decency among everyone for peace within the party and the state,” he said.