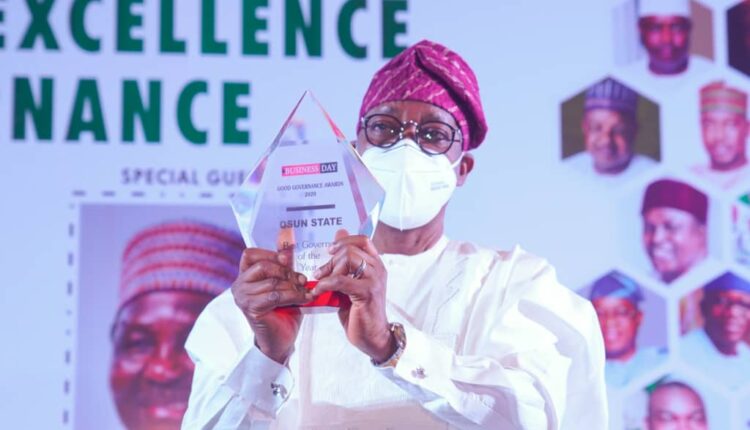 The Osun State Governor,Gboyega Oyetola, has bagged the good governance award for his exemplary leadership qualities and his administration’s transformation effort, with a promise to step up his developmental pace in covering all areas in the state.

He indicated that the recognition would serve as a motivation for him to strive hard in achieving more in the areas of infrastructural development and improve on all positive indices that makes the state stand out among its contemporaries.

Oyetola noted that he would have achieved more in every sectors of the state that would in turn impact on people and ensure economic prosperity of the state before the end of his first term.

Speaking after receiving the award at the ceremony which held in Abuja yesterday, Oyetola while thanking the organisers for the award, noted that apart from his developmental projects, more would be done in the area of youth empowerment toward securing the future of the younger generations.

The governor emerged the overall winner among other 36 state governors at the BusinessDay’s State Competitiveness and Good Governance Award for the Year 2020 held on Thursday.

Oyetola’s emergence as the BusinessDay newspaper ‘Governor of the Year’ for 2020, was also said to be in line with the organizer’s commitment to single-out performing public officers who had placed their states on a path of growth and accelerated development.

As gathered, the tangible transformation brought to bear on different sectors in Osun including health, education, security, and inclusive governance since the Oyetola’s assumption of office earned him the award.

According to the organizers, his giant strides in all sectors across the state could not be ignored, hence his recognition as one deserving the 2020 best governance award.

Furthermore, it maintained that achieving so much more in a year clouded by fall in the nation’s revenues and hardship occasioned by the outbreak of coronavirus made it impossible to ignore Oyetola’s transformation in Osun.

“The Award Committee which is made up of eminent Nigerians reviewed the pragmatic and tangible transformation Oyetola brought to bear in the governance of your state above your peers in the country across all segments including Health, Education, Security and Inclusive Governance since you became the governor.

“These are seen as a manifestation of good institutional transformations, creation of friendly business environment, expanding opportunities and a shift towards socio-economic development of State of Osun,” the organizers said.

The event which held at Transcorp Hotel, Abuja, was the eighth edition of the award created to ensure leaders at the sub-national levels of governance imbibe the culture of hard work and deliver the dividends of democracy to its citizens.

The governors of the 36 states of the federation competed in various categories in which the award committee, made up of eminent personalities, gathered primary data through on-the-spot assessments, interactions with the locals and the analysis of secondary data provided on different socio-economic parameters as published by the nation’s data agency, the National Bureau of Statistics (NBS).

Oyetola, who clinched the overall best governor of the year, distinguished himself as a quintessential administrator, an astute manager of men and resources, a silent achiever, an iconic leader with a large heart for the people and service and a trailblazer who believes that a leader is as good as his last accomplishment.