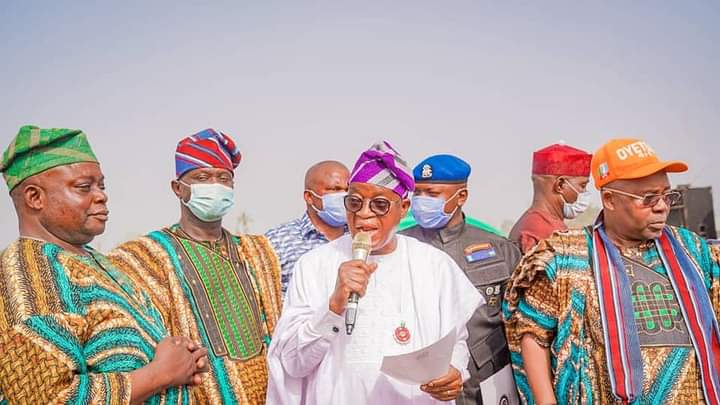 The Osun State Governor, Adegboyega Oyetola, has promised the traditional ruler of Iwo, Oba Abdul-Rasheed Akanbi, and millions of residents that the Osogbo-Iwo road would be fixed to ease vehicular movement in the state.

Oyetola, meanwhile, urged residents that were yet to obtain their Permanent Voter’s Card (PVC) to urgently visit the Independent National Electoral Commission (INEC) office in the state and perfect the collection process.

The governor noted that the collection would enable them to participate in next year, 2022, gubernatorial election in the State.

Oyetola stated these on Saturday when he joined the Akanbi, chiefs as well as sons and daughters of the Iwo to mark the 2021 edition of the annual Iwo Day celebration in the state.

The governor, who was welcomed to the town by a joyous crowd, educates the residents on PVC and advised them not to release their PVC to anyone under the guise of enjoying any empowerment. 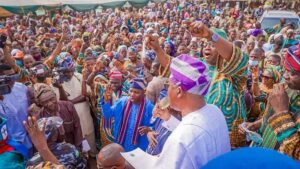 While congratulating the people of Iwo on the celebration, Oyetola noted that with what he saw, the ruling All Progressives Congress (APC) in the Osun had nothing to fear as the people were at home with the party’s policies.

The Governor, who acknowledged the presence of the former State Secretary of the APC, Rasaq Salinsile and former Secretary to the State Government (SSG), Moshood Adeoti, thanked the people of Iwo for their support and prayers for his Administration.

Earlier, Akanbi acknowledged the giant strides of the Oyetola-led administration, adding that since the Governor came in three years ago, the State has been enjoying peace.
“I am not here to campaign but when someone is doing well, we should say it. So far, Oyetola has proven to be a good leader,” Oluwo added.