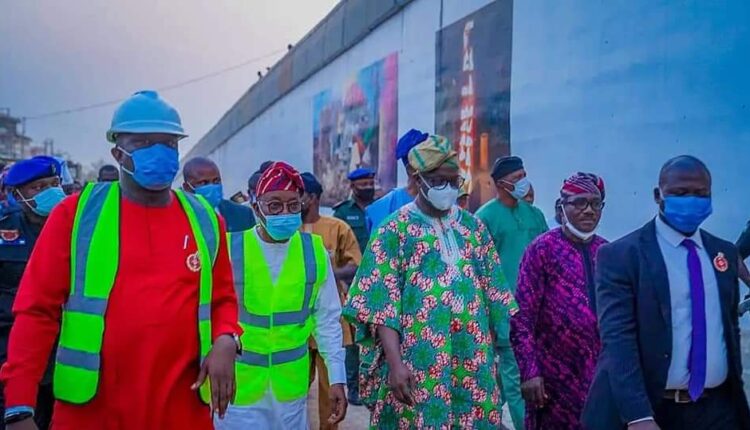 The Osun State Governor, Gboyega Oyetola, has expressed satisfaction with the quality of work done at the ongoing construction of Olaiya flyover in Osogbo, the state’s capital, promising that his administration would continue to prioritise delivery of quality infrastructural projects till end of his administration, and when reelected.

He said his government was irrevocably committed to giving Osun a facelift of development by raising the bar of socioeconomic and infrastructure development across nooks and crannies of the state.

The governor gave the assurance during his unscheduled inspection tour to the flyover construction site, at Olaiya junction, Osogbo where he was given a rousing welcome and received by workers on site and residents of the area.

Speaking yesterday after touring the project site in company of Osun Central lawmaker, Senator Ajibola Bashiru and some members of his cabinet, including the Commissioner for Works and Transport, Engineer Remi Omowaiye, Oyetola promised that no effort would be spared to ensure the delivery of quality and long-lasting infrastructure in the state.

He commended the contractor for being faithful to his promise of quality and standard job, saying it was a thing of joy that the project measures up to international standard as justified by the quality materials used. He also expressed gratitude to residents of Osogbo particularly people of the area for their patience and understanding, which he said, had culminated to the success of the project.

The governor urged people of the state to continue to support his government, noting that he was resolute to redefine governance towards improved infrastructural development for the uplift of the state and betterment of the people, whom he said, were the direct beneficiaries of his administration’s policies and programmes.

“I am highly satisfied with what I have seen so far. As you can see, the bridge is almost ready and in a number of weeks, it will be ready for the use of our people. You can see for yourself that this is almost completed. We don’t have room for abandoned projects.

“I must commend the contractor for doing a very good job. This flyover is of international standard. We are satisfied with what we have seen as the quality of work done is excellent. We are raising the bar of infrastructure in the State and we are not going to relent as we are committed to replicate this good infrastructure gesture in different parts of our dear State.

“I commend our people particularly those whose source of livelihood and economic activities were affected due to the construction of this edifice. I commend their patience and perseverance that have contributed to the success of this project.

“As we all know, we can’t do a project like this without some level of inconveniencies, so, I commend them for being patient with us. We are doing this in their interest, we want to ensure that they have a very smooth ride whenever they come around, we want to ensure that people that come around from far and near enjoy good network of roads. We are going to do more of this in some other places. I commend them and I thank the traders for their understanding.

“We are going to do a lot of infrastructure across the State, we are taking the advantage of dry season to do a lot of roads. This has been discussed at the State Executive Council meeting. Areas that have not benefited yet should just exercise patience because we are going to turn the entire state to construction site”, he added.

In his remarks, the Senator representing Osun Central Senatorial District, Senator Ajibola Bashiru, said that he was convinced that the construction of the flyover would go a long way to ease traffic, ensure smooth movement of persons and goods within the state capital and beyond.

Bashiru who doubles as the Senate Spokesman, lauded Oyetola for taking the welfare and general well-being of the masses as priority, saying “this has been demonstrated by the numerous achievements recorded across sectors particularly in the areas of infrastructure, health, education, security, commerce and industry.

“This iconic bridge will no doubt transform the landscape of the State capital not only the esthetic requirements but also the ease of transportation of goods and persons, and of course, facilitating commerce to the State.

“This is just one of the very important landmark road projects that have been done by the administration of Governor Adegboyega Oyetola, as several critical roads had been constructed and commissioned for use, such as the Ada-Igbajo road, Ede-Ejigbo road, Yakoyo-Moro-Ipetumodu-Asipa road and a couple of roads that will ease smooth transportation system,” Bashiru remarked.