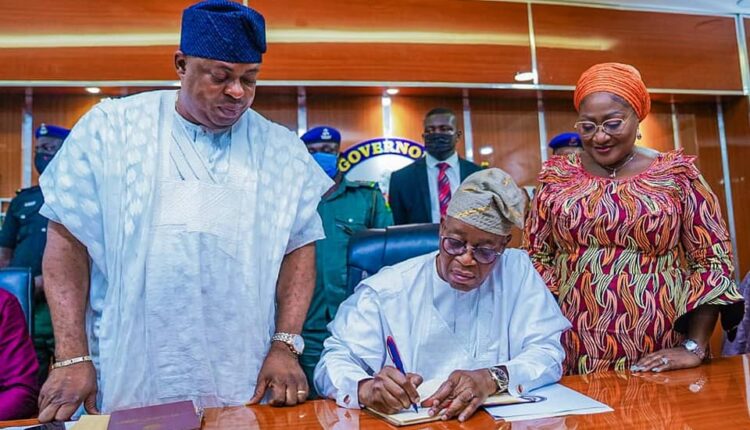 The Osun State Governor, Adegboyega Oyetola, has reiterated his administration’s commitment to welfare, creating enabling environment for thriving, and protecting lives and properties of residents across the state after signing the Violence Against Persons (Prohibition) Bill into law.

He said that the decision was aimed at further strengthening the fundamental right to life and ensure adequate protection of lives and property of the citizens in the state irrespective of religious, ethnic or political affiliation.

Oyetola who reassured of his administration’s commitment to citizens’ security, pledged that the state would ensure full implementation and enforcement of the new law such that every residents would feel impact of the government and have a sense of belonging during his tenure.

While signing the Bill at the Executive Council Lounge, Governor’s office, Abere, Oyetola said that his assent has marked the commencement of the law in the state. According to him, the law will no doubt help reduce to the barest minimum violence in public places especially against women and children, as provisions have been made in the law for maximum protection of persons anywhere in the state.

“My assent to the Bill today marks the commencement of the law in our State. Today’s event is equally historic because I assented to the VAPP Bill on the day the World is marking the International Day of the Girl-Child. I congratulate our children and also seize this occasion to re- assure them that under our administration, their future is secured, as we shall continue to do everything to ensure equal opportunities for them.

“We shall also continue to formulate and implement policies and programmes that will promote the progress and safety of the Girl-Child in Osun. The law will no doubt help reduce to the barest minimum, violence in public places, especially against women and children, as provisions have been made in the law for maximum protection of persons anywhere in the State.

“It will also adequately address issue of domestic violence and guarantee better and healthy living for the people of Osun. I assure our commitment to ensure full implementation of the law in the interest of our people, especially the weak in our midst,” Oyetola added.

Earlier, the Speaker, Osun House of Assembly, Hon. Timothy Owoeye, had said that the passage and consequent assent of the Bill into law would henceforth strengthen moral standard and instill discipline and sanctity into the society as its implementation and enforcement would spare no one.

According to him, the law will decimate any act of violence against persons in both private and public life. He commended the Governor for giving a free hand and for allowing members of the House to perform their functions without interference.

The Violence Against Persons (Prohibition) Act (2015) is an Act to eliminate violence in private and public life, prohibit all forms of violence against persons and to provide maximum protection and effective remedies for victims and punishments of offenders; and for related matters.

The signing of the Bill by the Governor, which coincided with the commemoration of International Day of the Girl Child further aimed to give priority and value to human existence and ensure peaceful cohabitation among residents.