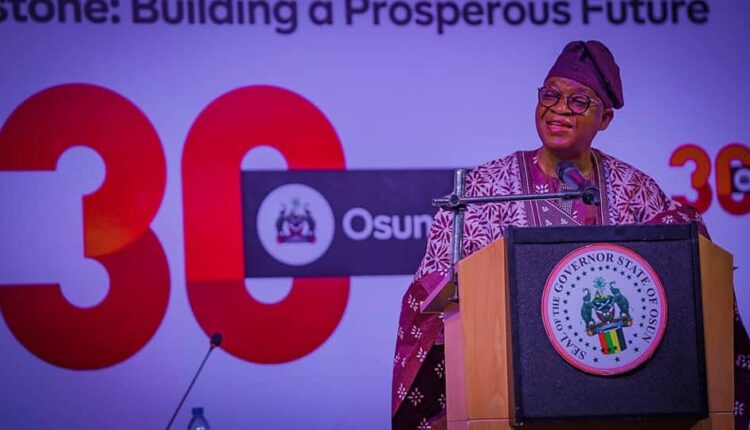 The Osun State Governor, Gboyega Oyetola, has disclosed that plans have been concluded by his administration to transform the state’s economy and accelerate its growth through increased investment on three major areas including education, technology and entrepreneurship.

He added that the identified areas had been chosen to kick-start new phase of sustainable governance that would augment sacrifices of the state’s founding fathers who toiled days and nights to put the state on the right track after 30 years of creation.

The governor added that with the milestone, it had become imperative for his administration to work assiduously and in unison to move the state forward in tune with reality of 21st century by investing heavily in improving standards of education, technology and create enabling environment for investors and businesses.

Speaking during the 30th anniversary colloquium of Osun on Thursday, Oyetola, congratulated the citizens of the Osun, describing the state as a full-grown entity that had surmounted its challenges with stoic resilience over the years of its existence.

According to him, colloquium has been designed as the intellectual arm of the 30th anniversary of our state to interrogate the performances of the state so far, examine possible gaps and project for a sustainable future that we all crave for as a people and desire to bequeathe to our posterity.

“As an administration, we have instituted this colloquium to celebrate our shared values and our collective resolve that have delivered the Osun that we desire and to give vent to our dream to prosecute our Development Agenda which is our strategy and road map to put our dear state on the path of sustainable development.

“We are confident that just as the foundation laid by our forefathers 30 years ago has earned us a viable place in the national and international space, our decision to lay bricks of contemporary governance structures will build a prosperous and sustainable future.

“This 30th anniversary is the end of a phase and the beginning of another: the beginning of sustainable governance and development, the beginning of a new era for a generation of Osun citizens that will ride on the wings of knowledge, technology and entrepreneurship to realise their potential, shut the door against unemployment, create wealth and radically transform the economy of the state.”

On his part, the Sultan of Sokoto, Sa’ad Abubakar III, described the achievements of Osun within its three decades of existence as one that humbles older states. Abubakar said that it was no surprise that in Osun’s 30 years of statehood, it had produced a galaxy of stars in all the sectors and areas of human endeavour, adding that the state was blessed in both human and natural resources.

The first class monarch lauded the government for electing to celebrate its landmark anniversary with a colloquium, adding that the initiative was a significant strategy for linking the past with the present and the future to build a sustainable enterprise.

Abubakar also commended Oyetola who he described as a gentleman governor, a bridge builder, a lover of development and a believer in one, strong and indivisible Nigeria.

“I have followed the programmes of Governor Oyetola closely since his assumption of office. A deep thinker and a silent reformer and performer, he came into government with Development Agenda hinged on adequate, quality and equitable service in all sectors. He has also introduced people-oriented policies based on inclusive governance and sustainable development. One other strategy he has employed to further engrain inclusive governance and sustainable development in the polity is organising this Colloquium as part of the programmes for this anniversary”, Sultan Abubakar said.

Also speaking at the colloquium, the Ooni of Ife, Adeyeye Enitan Ogunwusi, paid glowing tributes to the past and present leaders in the state, adding that Osun is now better than how it was at creation.

“Osun is better today than it was when it was created. What we are having here today attests to this fact. The journey of 30 years began with some people’s efforts and we appreciate the founding fathers, past administrators and incumbent governor, for their contributions to the growth and development of Osun. Osun is greater than every single individual, and it has become necessary to stress this fact for our people to be careful not to allow politics and other interests to disintegrate us,” Oba Ogunwusi said.

In his Keynote Address, a former governor of the State, Bisi Akande, lauded the founding fathers and past leaders of the state for what he described as achieving an optimum community and laying a foundation for the prosperous future of the State.

In their separate remarks, former administrators in the state, General Leo Ajiborisha (rtd.), Captain Anthony Udofia (rtd.) and Theophilus Bamigboye, felicitated the government and the people of the state on the anniversary, urging all to continue to sacrifice for the growth and development of the state.

Lagos education board, Taskforce partner on security around schools