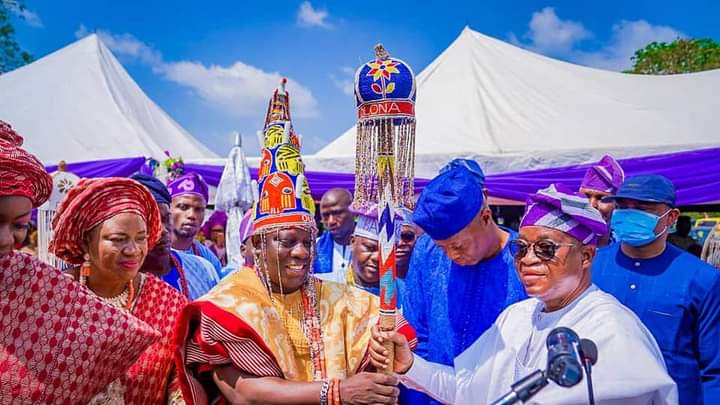 The Osun State Governor, Adegboyega Oyetola, has presented the staff of officer to the newly crowned Olona of Ada town, Oba Dr. Oyetunde Ojo, and charged him to sustain peace as well as attract massive investments to the town.

Oyetola said that Ada town was blessed with both human and material resources that could make it the preferred destination for all visitors, saying I urged you to ensure a robust development during your reign.

The governor handed over the staff of office to the monarch during a ceremony attended by eminent personalities on Saturday in Ada, Boripe’s local government area of the state.

Oyetola, while handing over staff of office to the traditional ruler, tasked him to rule the people with the fear of God and to seek peace, prosperity, as well as development of the town.

The Governor noted that Ada was blessed with eminent sons and daughters that were making waves in and outside the country, adding these are some of the town’s assets that you must work with.

According to him, the monarch has a duty to collaborate with everyone both within as well as outside the country and encourage them to attract massive development to the town.

Responding, the newly installed Olona of Ada, assured the governor that efforts would be made under his reign to ensure that the town progresses beyond its present status.

The monarch, meanwhile described Oyetola as a visionary governor and one that is passionate about the development the entire states which was why he had embarked on several projects.

According to him, in spite of the Coronavirus pandemic that had affected several economy globally, Oyetola has not allowed it affect his plan for the state and was why he had continued to stand out among his peers and remain the beacon of hope.

He, therefore, urged the people of the State not to hide under any political difference to cast aspersions on the government, insisting that Oyetola and his cabinet deserve commendation for the numerous achievements the administration has recorded in the last three years.

JUST IN: Ekiti former senator dies after collapsing in Abuja

JUST IN: FG to pay Kanu N1bn over house invasion

JUST IN: FG to pay Kanu N1bn over house invasion