No power disconnection to non-paying customers during… 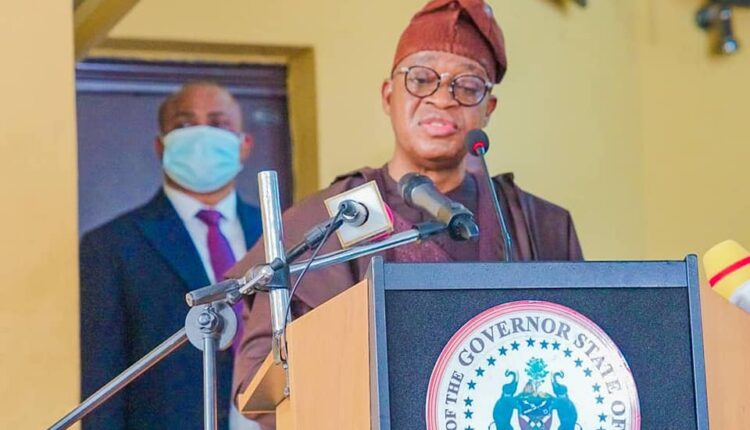 The Osun State Governor, Gboyega Oyetola, has disclosed that his administration has released and paid about N31 billion as pensions to all categories of pensioners in the state since 2018.

Aside from pension, he said that his administration had equally kept faith with his promises to ensure prompt and adequate payment of salaries and pensions to all categories of workers, both active and passive.

Oyetola said that the feat was achieved by his administration in line with campaign promise despite the harsh economic conditions arising from national economic challenges.

The governor spoke on Tusday after while addressing the retirees at the presentation of bond certificates to retired public servants, at the Multi-purpose Hall, Local Government Service Commission Abere, Osogbo.

According to him, my administration has been consistent in ensuring the release of N509,000,000.00 on a monthly basis to cater for pensioners under the old pension scheme.

“So far, we have released about 31 Billion Naira since 2018 when we came in, to cater for our pensioners. This represents about N26 billion for those on the old Pension Scheme and about Five Billion for those under the Contributory Pension Scheme. Since we came on board in November 2018, our administration has been doing everything possible to fulfil this promise despite the harsh economic conditions of our State arising from national economic challenges.

“Our Administration’s commitment to the welfare of workers, both serving and retired, remains unwavering. This, we have continued to do through regular and prompt payment of full salaries and allowances to all categories of active workers as well as full pension to all our pensioners at all levels.

“To cater for our pensioners under the old pension scheme, we have been consistent since November 2018, in ensuring the release of Five Hundred and Nine Million (N509,000,000.00) on a monthly basis. Similarly, we have never defaulted in discharging our responsibilities to those under the Contributory Pension Scheme,” Oyetola added.

Presenting the bond certificates to the beneficiaries, Oyetola said the decision was in continuation of his administration’s irrevocable commitment to the welfare of retirees, especially those who retired on the contribution Pension Scheme.

While commending the workers for their continued support and loyalty to his government, Oyetola pledged his commitment to continue to champion their welfare and well-being.

“We shall not relent in our efforts to ensure that all categories of workers and retirees get their entitlements as and when due. As a responsible government, we shall continue to adopt creative measures to power our economy, including intensifying efforts to encourage our people and our teeming youths to imbibe entrepreneurship as a way of creating jobs and defeating unemployment.

“Let me also use this opportunity to once again charge all public servants in the State to double their efforts in the area of internally generated revenue (IGR) to enable government to continue to meet the yearnings and aspirations of the entire citizenry of the State.”

In his remarks, the Head of Service, Dr. Festus Olowogboyega, applauded the Oyetola-led administration for prioritising the welfare and well-being of the citizens, particularly both active and passive workers in the State.

Olowogboyega who enumerated some of the tremendous achievements of the administration so far, said that it is worthy of note that the state government had released and paid a whopping sum of N31billion to all categories of pensioners in the State.

Also, the State Chairman, Nigeria Labour Congress (NLC), Comrade Jacob Adekomi, expressed gratitude to the Governor for taking the welfare and well-being of the civil servants as priority.