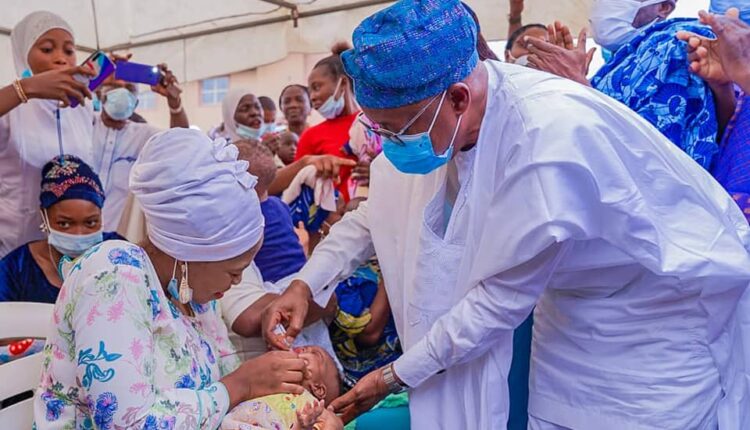 Oyetola said that the initiative was designed to produce an army of healthy children who will inherit and sustain the administration’s Development Agenda and be the face of the Osun dream. Speaking at the inauguration ceremony, held at Ayegbaju international market, Osogbo, Oyetola said that by inaugurating the exercise, the government was trying to prevent Circulating Vaccine Derived Polio which are in some states in Nigeria from getting to Osun.

He added that the initiative would serve as a booster to the health segment of the Administration’s Development Agenda which encompasses adequate, quality and equitable healthcare delivery in all its ramifications. Oyetola who disclosed that his Administration had adopted adequate and prompt strategies to remedy and revitalise the health sector.

According to him, the Administration’s healthcare delivery is a holistic, expansive and interconnected exercise hence, the polio exercise targeted at further enhancing the health of the children. He enjoined the residents, particularly parents and guardians, to take maximum advantage of the initiative, saying, “I urge our mothers to cooperate with government by visiting our health centres to avail the chidren of the available facilities.”

He further said: “Today, we are widening the healthcare delivery net by flagging off the outbreak response to circulate vaccine derived polio to give our children good health attention and put the minds of their parents at rest. You will all recall that Nigeria was confirmed to be polio free on August 25th, 2020 with zero cases of the wild poliovirus. The nation was the last polio endemic country in Africa and was officially certified free from polio after making three consecutive years since the last case of wild polio had been identified.

“However, what we are trying to prevent today is Circulating Vaccine Derived Polio which are in some states in Nigeria today so as to prevent it from getting to Osun. This vaccination will be given to our children who are within the age range of 0-59 months. The main vaccination will be for a period of four days while there will be mop up for two days so as to get to areas where there could be missed Children.

“I am therefore appealing to mothers not to be afraid of the exercise. Mothers should bring their children for vaccination so that the health of their children can be boosted and guaranteed. This exercise is proactively designed to produce an army of healthy children who will inherit and sustain our Development Agenda and be the face of the Osun of our dream. I urge our mothers to cooperate with government by visiting our health centres to avail the chidren of the available facilities,” he added.

While enumerating some of the interventions made to revamp the health sector, Oyetola said, “since coming into office, we have adopted adequate and prompt strategies to remedy and revitalise the health sector, including battling the Coronavirus pandemic, eliminating open defecation, and drastically reducing child and maternal mortality.

“Our School Free Feeding Programme which is targeted at children at the elementary school stage to enhance their health and mental alertness is also on course. Our renovation and revitalisation of nine General Hospitals and 332 Primary Health Centres programme, one per ward, which was flagged off three months of our coming into office, has reached an advanced completion stage as over 300 of them have been completed. All the Centres have qualified staff and adequate and quality drugs.

“We have also instituted the Osun Health Insurance Scheme with affordable premiums for workers and zero premiums for the vulnerable, including the aged and persons living with disabilities to provide affordable healthcare for our people.”

Earlier, in his welcome address, the Chairman, Osun State Primary Health Care Development Board, Leke Ogunsola, applauded the Oyetola’s administration for taking the health and general well-being of the citizens to the front burners.

He said that the Board has been working hard to ensure smooth delivery of immunisation to all households across the nooks and crannies of the State.

“The performance of this Administration in all sectors has been nothing short of stellar, especially in the area of health, with much focus on healthcare delivery at the grassroots. The first round of this Polio Outbreak Response Immunisation Exercise held in September this year, and it was observed that some children didn’t get immunised as a result of the reculcitrant attitude of some parents in refusing to present their children for immunisation. The second of the programme has already commenced on the 16th of this month, with the active implementation ending on the 19th and a mop-up exercise between 20th to 24th.”

Also speaking, the State Coordinator, National Primary Health Care Development Agency, Dr. Modupeola Oyesiji, commended the governor on his prompt response to health related matters, saying this has proven his determination as taking the sector to the next level of development.

Dr. Oyesiji who described the provision of quality health as non-negotiable to every serious, responsible and responsive government, hailed the Governor for being resolute in his commitment to advancing the course of the citizens as reflected in the myriads socioeconomic and infrastructure development in the health sector.

She said, “We are very grateful for your timely and prompt payment of salaries which has been the motivation to enhancing the health sector. You have really assisted us in the health sector by assuring us that it is your priority. We have all the machineries in place to let us succeed. The immunisation is the right of every child and we will do everything to ensure that our children get immunised.”

The Representative of World Health Organisation (WHO), Dr. Bello Hammed, commended the Governor for being faithful to his electoral promises, particularly for allocating the recommended percentage to health sector in the Year 2022 Budget.

He said, “It is worthy of note that Osun is among the few states that have earmarked the required percentage to health sector as requested by WHO.

“I must also commend the tremendous achievements of the government to reposition the health sector. No doubt, the State is doing well in improving the health of the citizens as it has taken full ownership of their health.”