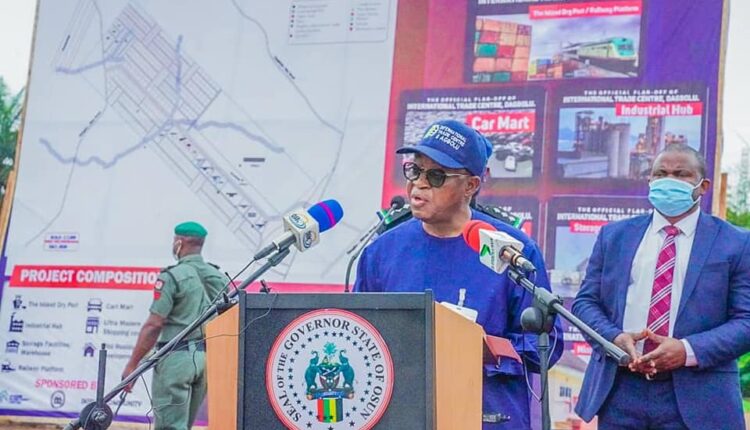 Share
The Osun State Governor, Gboyega Oyetola, has reiterated his administration’s commitment to transforming the state’s economic fortunes, saying the infrastructural projects being embarked on were aimed at unlocking Osun’s economic potentials.

He explained that the need to change the state’s narrative from civil service state to a commercial, industrial hub necessitated the projects being embarked on recently, including the Osun international trade center and inland port in Dagbolu area of the state.

The Governor noted that the state would be entering its season of economic revolution upon completion of the developmental and infrastructural projects been embarked on by the government.

Speaking on Thursday during the flag-off of Osun International Trade Centre and Inland Port in Dagbolu, Oyetola said that by both projects, his administration was poised to transform the socioeconomic activities of Osun and open the state to the international communities.
According to him, the trade centre and inland port, a huge employment generator, will sit on 206 hectares and its components include an Inland Dry Port, an Industrial Hub, an International Trade Centre/Railway Platform, a Car-Mart, a Mini Residential Development and a storage facilities/warehouse.
Oyetola noted that the project was central to the economic transformation as it was designed to promote trade and commerce in the state and its environ, adding that the establishment of the international market would go a long way to facilitate rapid economic growth and development of the state, generate massive employment opportunities for the unemployed population and encourage massive production of agricultural produce, especially food crops.
He revealed that the project would reduce road mishaps through haulage of goods by rail and equally serve as a great asset for the State in particular and the country at large as great commercial frontiers would be opened.
“full lockdown”
“It is exciting that this project is seeing the light of day after its initiation eight years ago by the Ogbeni Rauf Aregbesola’s administration. There is no doubt that the season of economic revolution is here. Exactly this day last week, precisely September 17, we performed the flag-off of Osun Ethanol Bio-Refinery Factory located in Ayekale. Today, we are in Dagbolu to perform another feat in the realisation of our promise to engender economic recovery and transformation in the State.
“As we indicated during the convocation of Economic and Investment Summit, collaboration with core international and local partners is one of our strategies for achieving economic transformation. This project is central to the economic transformation of the state. It is designed to promote trade and commerce in the state and its environ; make all goods, manufactured locally or imported, for which traders in the State and neighboring states hitherto had to travel to Lagos by road with its attendant risks to lives and properties, available in Osogbo at Lagos prices.
“I wish to reiterate the avowed commitment of this government to taking the State out of the woods in this period of economic downturn and make it a commercial hub of the southwest. I want to assure all that we shall leave no stone unturned in providing the required enabling environment for business and commerce to thrive in the State. In that line, apart from what is happening here now, we are also into negotiations with other investors who are ready to site their companies at the State’s free trade zone and industrial parks. By the time all those negotiations begin to manifest, we would have made a compelling statement about our promise to turn the fortune of the State around,” Oyetola said.