Why I enrolled my son in public primary school-Kaduna… 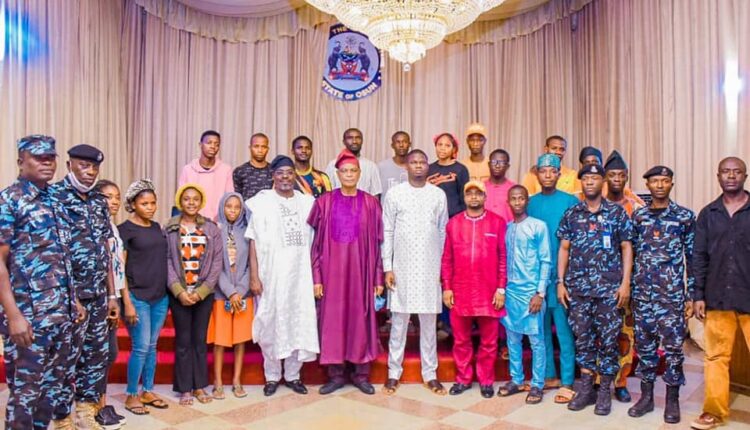 The Osun State Governor, Gboyega Oyetola, has evacuated Osun’s indigenous students from Plateau State and also reassured people of the state that his administration would continue to respond swiftly to emergencies, stressing that his government was committed to the safety and welfare of the populace.

He said that the state government would not spare any effort in ensuring the safety of its people within and outside the state, adding that all measures would be put in place towards maintaining the state status in terms of peace.

Oyetola gave the assurance yesterday when he received students of Osun origin who were recently evacuated by the state government from Jos, Plateau State in the wake of security unrest in some parts of the state.

Receiving the students at the Government House, Osogbo, the governor who was represented by the Secretary to the State Government, Wole Oyebamiji, commended security operatives especially the Nigerian Police for ensuring the safe return of the affected students to the State.

According to him, when we heard the news last Monday, the governor directed immediate evacuation of the students by the appropriate authorities in charge of education and students matter. The students however assured us that they were all safe, and on that strength, we relaxed.

“We were still contacting the University of Jos Vice -Chancellor who also kept assuring us of the students’ security, but all of a sudden, on Friday, we received a report that there was still danger and that is why we had to take proactive action to evacuate the students from Plateau State.

“I thank God that you all arrived safely and urge you not to be distracted, concentrate on your study at home and avoid unnecessary gatherings and take necessary precautions because COVID 19 is still real. I encourage you to use your time at home productively and don’t return to Jos until there is assurance from security agents that all is well.cAs a government, we shall continue to respond swiftly to emergencies to ensure safety of our people in any part of Nigeria,” he said.

The Senior Special Assistant to the Governor on Students Affairs and Social Mobilization, Kehinde Ayantuji, explained that the distress call to evacuate the students of Osun origin heated up when the unrest escalated and the students were afraid of their safety.

He noted that Oyetola had initially made arrangement for the students to be airlifted to Osun but the curfew in Jos stalled the process as the students who were scattered in different parts of the state could not access the airport.

“The governor had contemplated arranging a flight for the students but the process of evacuation was tedious as a result of the curfew in Jos. Our students could not access the airport, they were picked up in different locations at the various flash points. This is why we resorted to road evacuation with escort from Plateau State Police Command. We were able to evacuate the students with the help of the Commissioner of Police, Plateau State. They arrived the Osun at about 2 pm on Sunday,” Ayantunji said.

While narrating the ordeal the students faced, the Osun State Students Coordinator in UNIJOS, Oluwasanmi Sinmiloluwa, said that Jos was tensed and the lives of the students were threatened as the crisis thickened.

“The police was going around with Armoured Personnel Carrier to pick students from their hostels. We were under the rain and sun for hours. We thank God that we are finally in our state. We thank Governor Adegboyega Oyetola for the prompt response to secure our lives.”

The Commissioner for Youths and Sports, Yemi Lawal, Special Adviser to the Governor on Education, Hon Jamiu Olawumi, President National Association of Osun State Students (NAOSS) Wasiu Sanusi, President, Oduduwa Students in UNIJOS, Adewole Kolawole were among officials who were on ground to receive the students.