I Don’t want to return to Kano – Sanusi 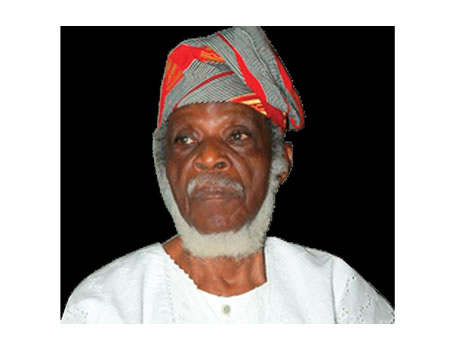 In an emotional laden voice, Osun State Governor, Adegboyega Oyetola, has described leader of Yoruba socio-political group, Afenifere, late Senator Ayo Fasanmi, as a Nigerian that worked tirelessly for the growth and development of Nigeria.

Oyetola said that Pa Fasanmi was a beacon of hope for a new Nigeria and that this made him a source of encouragement to the younger generation of politicians and public administrators in the country.

The governor extolled virtues of the former lawmaker, who passed barely five days ago at age 94, during a Commendation Service held in his honour in Osogbo, Osun state.

He noted that though the deceased was an Ekiti indigene but decided to reside in Osun and inspite of his age, worked for Osun and often offer suggestions that can help address challenges in the state.

Aside from Osun, Oyetola said that the late pharmacist would not be forgotten for his tireless service for the progress of the Yoruba race as an Afenifere leader.

According to him, every 30 minutes at Pa Fasanmi’s feet was worth more than reading scores of books on politics because he was a passionate believer in a better Nigeria.

Arguing that the deceased promoted, projected and lived for the principles and legacies of the late Chief Obafemi Awolowo, the governor opined that Fasanmi proved that loving and serving Nigeria passionately and without personal benefits was doable.

“While alive, he was ever seeking to enrich and expand the frontiers of socio-political knowledge, encourage mass political participation, offer selfless service to build a successor generation.

“Pa Fasanmi’s life, times and legacy typify the Omoluabi ethos that the State of Osun holds dear. Despite his advanced age, he was a regular face at all Osun programmes and would offer sincere counsel for the growth and development of the State.

“It is unfortunate that he died at a time we were all looking forward to celebrating his 95th birthday and tapping more from his fountain of knowledge and experience. No doubt, his death is a colossal loss not only to Osun where he lived until his death or Ekiti where he hailed from, but also to the entire country and the black race. He will be greatly missed”.