Nigeria, others will overcome coronavirus predicament … 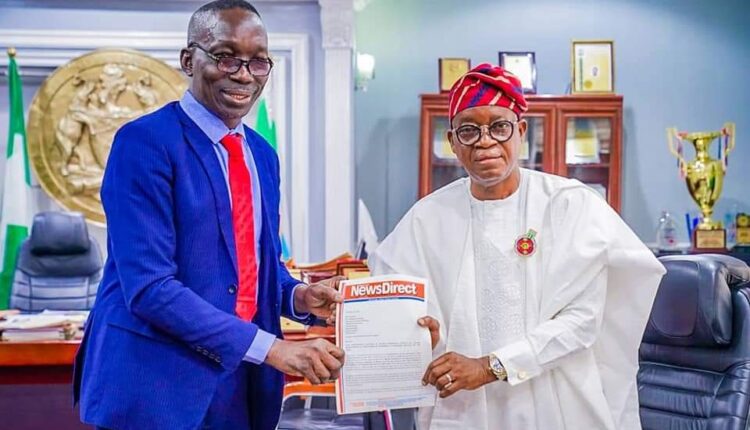 The Osun State Governor, Gboyega Oyetola, has bagged the 2021 Best Governor and Man of the Year Award for his outstanding leadership style and inclusive governance, particularly his administration’s commitment to formulating people-oriented policies and programmes directly impacting the masses.

As stated, the award was in recognition of the governor’s purposeful leadership, all inclusive-participatory governance and timely execution of people-oriented policies and programmes as demonstrated in the running of the affairs of the state in the last three years.

Announcing Oyetola as the winner of the award, the management of Nigerian NewsDirect Newspaper, who is also the organiser, said that the governor was singled out for the honour following his governance style despite the meager resources accrued to the South West state.

Presenting the nomination letter for the award to the governor at his office yesterday in Osogbo, the Newspaper’s Publisher/Editor-in-Chief, Dr. Samuel Ibiyemi, commended Oyetola for running a people-focused and masses-driven administration, saying his government’s policies and programmes had impacted greatly in the lives of the citizens.

He described the proposed award as a motivating gesture to encourage the governor to do more and not to relent in his administration’s resolve to transform the state and build a virile economy.

The newspaper’s publisher who attributed the outstanding performance of the governor as a yardstick to merit the award said “this is in recognition of your political will to reform policies that are not people friendly.”

He added: “We want to celebrate and honour Your Excellency for being resolute and highly determined in your decision making and policies implementation aimed to bring succour and turn around the socioeconomic fortunes of Osun.

“It is also in recognition of your huge investment in infrastructure, health, education, mining and agriculture as well as the ability and dexterity applied to ensure regular payment of full salaries and pensions to active and retired workers.

“We are honouring you as well, for working so hard to increase the revenue profile of the state which has witnessed astronomical improvement in the last three years of your Adminstration.

“We have seen high level of transparency, accountability and probity in the management of the meagre resources coupled with your zero loan resolve inspite the bitting economic situation in the state. This award is also in recognition of the existing peaceful cohesion among political stakeholders, particularly local authorities across the State.”

Responding, Oyetola expressed gratitude to the management of the newspaper for recognising the modest achievements of his administration. He assured that his government would continue to do more for the people just as he urged the Newspaper management to continue to uphold the ethics of their profession.