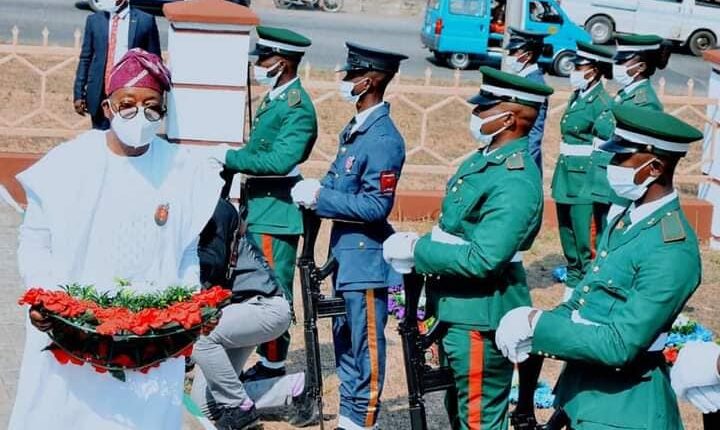 The Governor of the State of Osun, Adegboyega Oyetola, has commended the supreme sacrifice, selfless service and invaluable roles played by officers and men of the Nigerian Armed Forces in continually ensuring the oneness and indivisible Nigeria.

He saluted the fallen heroes and gallant soldiers and officers for their unparalleled sacrifice in defending the nation’s sovereign integrity, peace, and unity since its creation.

In appreciating their efforts, the governor said maintained that his administration would continuously prioritise the welfare and general well-being of the security agents, particularly officers and men of the Nigerian Armed Forces.

Oyetola spoke on Friday at the Grand Finale of the Year 2021 Armed Forces Remembrance Day held at the Military Cenotaph, beside State House of Assembly Complex, Osogbo.

Oyetola who described officers and men of the Nigerian Armed Forces as worthy exemplars and selfless citizens said the nation would continue to be grateful to them for their tireless efforts in promoting unity in the nation’s diversity.

“Today is a day set aside to reflect on the invaluable role you have played and continue to play in nation-building. As courageous and patriotic citizens, you have, in the face of threats, braved the odds to defend our nation’s sovereign integrity, peace, and unity.

“As valiant fighters, you have sacrificed your comforts in order to ensure that our nation enjoys the required tranquility to negotiate our quest for prosperity and abundance for our teeming population.

“Today, we recall with gratitude, our fallen heroes who have paid the supreme price for our nation during the First and Second World Wars, the Nigerian Civil War, various peace support operations, internal security operations, and the fight against insurgency and banditry in the North Eastern and North Western parts of the country respectively.

“To these fallen heroes, we stand together with their families and loved ones to affirm that they did not die in vain; rather, they yielded their lives for the worthy cause of sustaining our common heritage as a people.

“Indeed, our continued existence as one people with common destiny pays tribute to their heroic sacrifice. To all our living heroes and gallant officers, you are our pride. Your dedication to duty continues to guarantee our collective peace and security.

“You exemplify in the most admirable manner, the best in us as a people. You are worthy exemplars, unwavering, and selfless. Through your professionalism and commitment to the cause of nationhood, you constantly inspire us all not to live for ourselves, but to live for our collective honour and good as a people blessed of God,” Oyetola added.