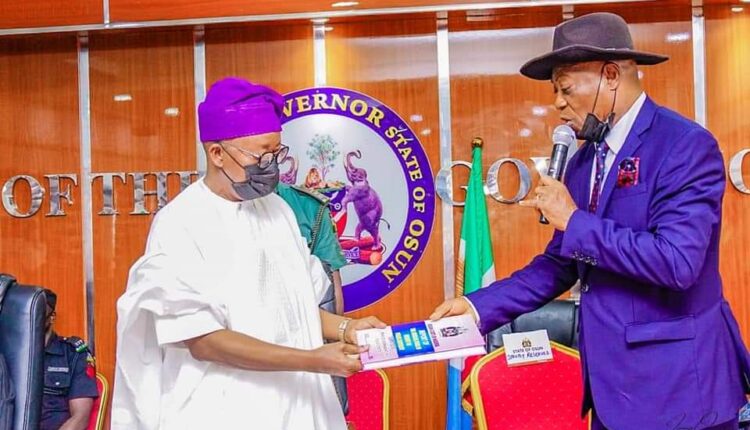 The Osun Judicial Panel of Inquiry on Police Brutality, Human Rights Violations and Related Extra Judicial Killings, has presented its report to the State Governor, Adegboyega Oyetola, for consideration and implementation, ten months after the panel was constituted, with a promise to ensure victims of police brutality get justice.

This is even as the governor pledged his administration’s readiness to implement the recommendations of the panel, saddled with responsibility of unraveling matters relating to police brutality, human rights violations and related extra judicial killings in the state, in a manner that shall ensure that justice was served to all concerned.

Speaking during the presentation of the report at the Executive Council’s Lounge, Governor’s Office, State Government Secretariat, Abere, Osogbo, Oyetola said that his administration was fully committed to the instrument that would strengthen the weakest link of Omoluabi family chain in the state.

He said the that the administration has instituted structures to ensure justice for all at all times, emphasizing that “we have resolved that never in our Omoluabi ecosystem shall our people be subjected to injustice by elements that are strange to us.”

Oyetola noted that his adminstration has been harnessing the available resources
to take care of the interest of the youth and the people as part of efforts to empower them to find useful expressions for their innate talents, skills and competencies so that they can contribute their quota to the development of the State.

He said: “You will all recall that about nine months ago, we inaugurated this 12-member Panel, ably led by Justice Akin Oladimeji, a Rtd. Justice of the High Court, to grant justice to the weak. The Panel had a six- month deadline to submit its report. In line with their training, integrity and professional dictum that justice delayed is justice denied, the panel are here today to present their report.

“There is no doubt that the tissues of injustice that gave rise to this Panel are strange to us. They are alien to the elements that announced us to the world as the most peaceful state in Nigeria. The inherent canvass of injustice is out of character to us and they were the reasons we rose to the occasion to give justice to the oppressed no matter the costs, as we believe no price is too much to pay for justice and peace.

“We resolved to heal the wounds of those that hurt among us so as to reintegrate them into our fold, get the best out of them and move on as one big, strong family. As a people, we reject a culture that reduced our citizens to victims of injustice and democracy they fought hard to enthrone in their fatherland.

“Today, we shall determine to work together as a family and take the weakest of the weak by the hand as we walk the lane of sustainable freedom, progress, peace and development. We have instituted structures to ensure justice for all at all times. We have resolved that never in our Omoluabi ecosystem shall our people be subjected to injustice by elements that are strange to us. Going forward, let us resolve to make all the external and internal institutions and individual citizens to conform to our Omoluabi ethos to build a state we shall forever be proud of.

“The heroes of this initiative are the weakest of the weak among us who slammed the door against hope in the face of tyranny and oppression but woke up the following day to discover that hope was at their doorsteps. I assure them and the good people of Osun that we shall implement the recommendations of this Panel in a manner that shall ensure that justice is served to all people.”

Presenting the report, the Chairman of the Panel, Justice Akin Oladimeji (rtd.) disclosed that out of 34 memoranda received, a total of 13 of the 34 petitions considered were however dismissed/struck out for various reasons as stated in the report.

He said that the reasons for the dismissal of the said petitions ranged from personal withdrawal by the petitioners, lack of diligent prosecutions, lack of competence and being outside the panel’s terms of reference.

Justice Oladimeji noted that 23 petitions were considered on merit out of which two were dismissed after hearing. He said recommendations were given by the panel in respect of 21 which are contained in the report that is being submitted to Governor for consideration and further action.

According to him, the panel, in the course of its sitting, observed that the major problems confronting the country were caused by the police, hence the need for the Panel to make some recommendations, including ensuring proper recruitment into the Police Force or any other security agency without political consideration and subjection of appointed officers to psychiatric test.

“The panel also observed that all the security agencies in the country lack proper monitoring and recommended that the Federal Government should establish an independent body to be saddled with the responsibility of monitoring the affairs of police and other security agencies.