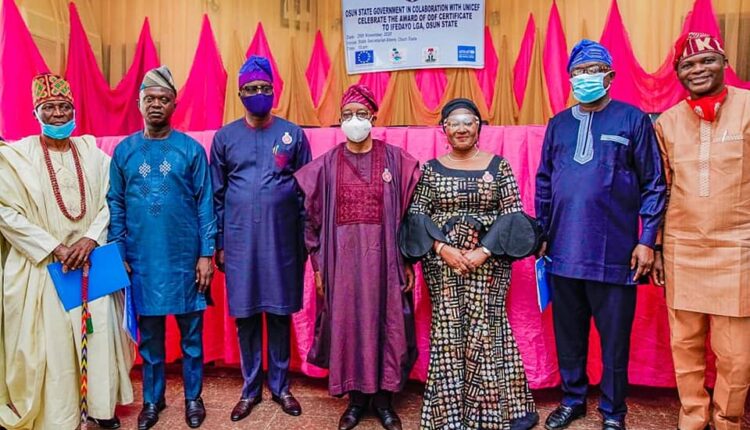 As part of measures aimed at ending open defecation in Osun State, the state Governor, Gboyega Oyetola, has assured residents across the state that plans are being concluded to ensure all indigents have access to public water and other sanitation facilities.

He explained that though the menace of open defecation had been enormous, his administration would leave no stone un-turned in reversing the effect and making available necessary facilities that can halt its continuation.

Oyetola who noted that open defecation remains one of the biggest public health concerns in developing nations, said that machinery would be set in motion to reverse it severe consequences on humans and the environment.

Speaking at the presentation of certificate of Open Defecation Free status to Ifedayo Local Government Area of Osun by UNICEF in partnership with the Office of First Lady of Osun, on Wednesday, the governor said that the state would be targeting 2025 to end open defecation in the state.

While commending the Ifedayo LGA for the feat, Oyetola said that the recognition meant that all households and public places in the area now have toilet facilities and that more would be done to replicate the achievement across the state.

According to him, open defecation has become a thing of the past in the LG and with the feat, Ifedayo becomes the first LG in South West to achieve this feat and 15th in Nigeria.‬

“I would like to express huge appreciation to UNICEF and the European Union for their tremendous intervention in the Water Supply and Sanitation Sector Reform Programme and consequently the campaign against open defecation in Osun.

“One of the milestones that the reform programme has brought is what we are witnessing today, the celebration of Open Defecation Free Status in all the major towns and cities of Ifedayo.