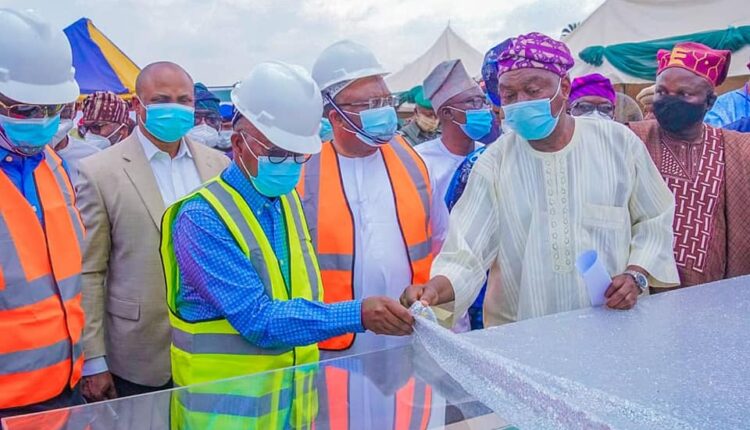 The Osun State Governor, Gboyega Oyetola, has disclosed that his administration would not tone down on its improved funding being allocated for the state’s education sector in its bid to equip and raise top-notch schoolars and solution-driven younger generations.

He indicated that his government would stop at nothing in ensuring continuous adequate funding for the sector and place education in its prime place in the scheme of things as part of efforts to ensure sustainable development, all-around growth, and transformation of the state.

Oyetola said that the improved allocation for the sector was in line with his administration’s agenda which considers education and moral standing as essential tools for building leaders of tomorrow.

The governor who spoke after laying foundation stone of the proposed Minaret International University by the Ahmadiyya Muslim Jama’at of Nigeria, in Ikirun, Ifelodun Local Government Area of the state, said that his commitment to development of education led to the about N11 billion budget for the sector in 2021 budget.

Oyetola, who described education and religion as timeless and potent instruments for the development and transformation of society, said his administration has been providing qualitative, functional, and affordable education for children at all levels.

He added that while state government was doing its best in terms of adequate funding, the state’s door is open for interested investors, particularly private sector and individuals willing to invest in the state to augment’s his administration’s effort.

“The expediency of these two tools is even more compelling today that the society requires moral and ethical rebirth. It is therefore heartening that Minaret International University is combining religion and education to build the character of our youths and help them to acquire knowledge to deliver the future that we desire.

“Our administration considers education and good moral standing as essential tools for building leaders of tomorrow and ensuring sustainable development. Consequently, we have been providing qualitative, functional, and affordable education for our children at all levels.

“As proof of our commitment, we have been funding education as appropriate at all levels. For instance, in this year’s budget, the education sector got a substantial share as about Eleven Billion Naira, representing 18 percent was allocated to the sector. Interestingly, 15 to 20 percent is the international benchmark.

“In line with the belief of the State that government cannot solely provide the education the State needs, successive governments have encouraged willing individuals and groups to establish schools at all levels.
“Consequently, Osun is home to top-notch tertiary institutions that are making their contributions to the development of the State and the nation.

“The establishment of Minaret International University is a welcome addition to this family. As a notable, knowledge-seeking, and religion-savvy institution known for its tradition of excellence, I have no doubt that Ahmadiyya Muslim Jama’at will build a university that is a centre of excellence in deed and in truth. I am also persuaded that the organisation will produce graduates who will be problem solvers and job creators,” Oyetola added.

Commending the leadership of Ahmadiyya Muslim Jama’at for its decision to build a university in Osun, Oyetola noted that the establishment of the new citadel of learning would further contribute positively to the educational development in the state.

He said that the institution when completed would further help to propagate morality and ethics expected of noble citizens as its contribution to building a peaceful, competitive, and prosperous Osun.

“Ahmadiyya Muslim Jama’at Nigeria has proved over the years to be a frontline Muslim organisation in the propagation of the Islamic faith. It has also demonstrated an irredeemable commitment to the peace, progress, and welfare of the people and State of Osun and the nation. These contributions are traceable to the visionary leadership of the organisation. On behalf of the Government and People of the State of Osun, I express sincere appreciation to this notable organisation for its services to the State and humanity,” he added.

Earlier, the National Head, Ahmadiyya Muslim Jama’at of Nigeria, Barrister Alatoye Azeez, appreciated the unflinching support received from the State government towards the actualization of the foundation laying of the project.

He said the leadership of the Muslim organisation was resolute to build an innovative university with a difference and compete favourably with its counterparts across the globe in line with international best practices.

According to him, the proposed university will be value-focused, employment-focused and a world-class tertiary institution for the intellectual and manpower development of human resources for sustainable socio-economic development nationally, regionally, and internationally.