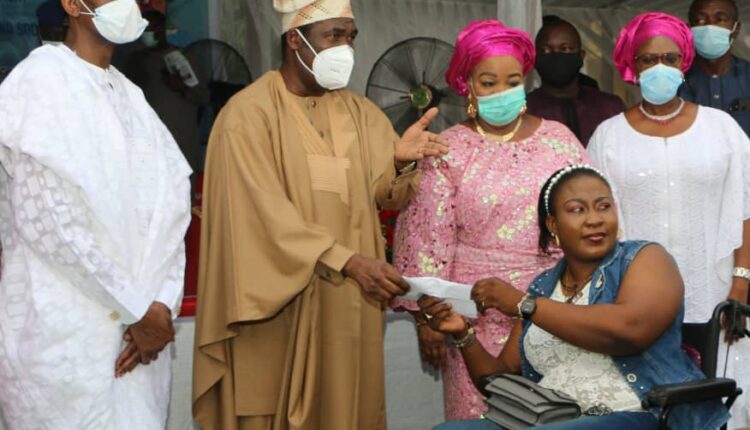 No fewer than 8,000 women across Local Government Areas in Lagos State have benefitted from the Federal Government Special Grants of N20,000 for rural women in the state.

As stated, the special grant which was introduced last year for rural women was aimed at sustaining the social inclusion agenda of President Buhari’s administration in line with the president’s national vision of lifting 100 million Nigerians out of poverty in 10 years.

The Minister for Humanitarian Affairs, Disaster Management and Social Development, Sadiya Farouk, said that the scheme was designed to provide a one-off grant to some of the poorest and most vulnerable women in rural and peri-urban areas of the country

Speaking on Friday during the flag-Off ceremony held at the Police College, Ikeja, the minister, who was represented by the ministry’s Permanent Secretary, Bashir Akali, said that the special grant would be disbursed to no fewer than 125,000 poor women across the 36 States of the Federation and the Federal Capital Territory.

She said that the special grant project is targeted at addressing the scourge of poverty amongst the poor and vulnerable women dwelling in the rural areas in the country.

“Our target in Lagos State is to disburse the grant to over 8,000 beneficiaries across the all Local Government Councils. The grant is expected to increase income and productive assets of target beneficiaries. It is our hope that the beneficiaries of this programme will make good use of the grant to generally contribute towards improving their living standard,” she said.

On his part, the state’s Governor, Babajide Sanwo-Olu, stated that the objectives of the initiative are in line with his administration’s THEMES agenda and reflect the commitment of the government to the Sustainable Development Goals.

Represented by his Deputy at the event, Dr. Obafemi Hamzat, Sanwo-Olu described the scheme as a testament to his administration’s determination to change the socio-economic development narrative of Lagos where rural women in the state become the centrepiece of a strategy in poverty reduction through women empowerment.

“We have continued to demonstrate this determination through the numerous gender-based intervention programmes being implemented through the Ministry of Women Affairs and Poverty Alleviation, Ministry of Wealth Creation and Employment and the Lagos State Employment Trust Fund. I am happy to say that these programmes are making the desired impact as many beneficiaries are becoming economically independent and contributing meaningfully to the socio-economic development of the State.”

Furthermore, Sanwo-Olu stressed that his government would continue to initiate specifically designed empowerment programmes that would assist in cushioning the negative effects of the COVID-19 pandemic on rural women and their small-scale businesses in the state.

He, therefore, appealed to beneficiaries of the grant to deploy the fund as a seed to boost their trade and businesses for greater income.

He said, “The grant should be judiciously utilised for good returns on investment, as this is the main vision behind the initiative.”