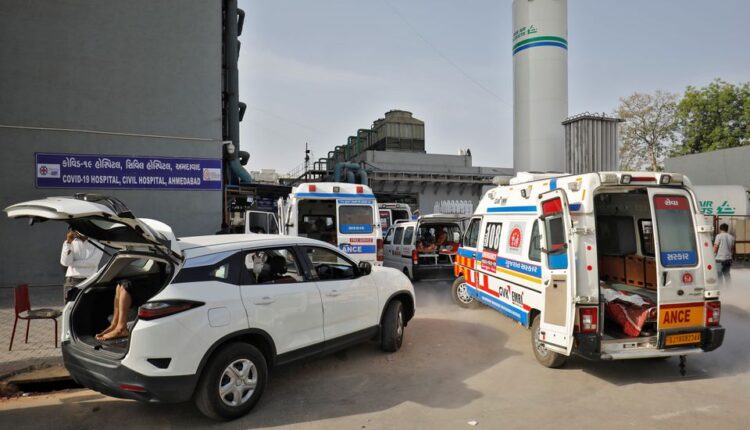 As second wave of coronavirus pandemic raised new fears about the ability of crumbling health services to cope, India has recorded the world’s highest daily tally of 314,835 new COVID-19 infections. on Thursday

Health officials across northern and western India including the capital, New Delhi, said they were in crisis, with most hospitals full and running out of oxygen on Thursday.

Some doctors were advising patients to stay at home, while a crematorium in the eastern city of Muzaffarpur said that it was being overwhelmed with bodies and grieving families had to wait their turn.

New Delhi’s Deputy Chief Minister, Manish Sisodia, said that some hospitals in New Delhi had run out of oxygen, and authorities in neighbouring states were stopping supplies being taken to the capital to save it for their own needs

“It might become difficult for hospitals here to save lives,” Sisodia said in a televised address.

Also, a virologist, and director of the Trivedi School of Biosciences at Ashoka University, Shahid Jameel, said that the health facility has been overpopulated and that other avenues were being explored to cater and render help to patients.

“Right now there are no beds, no oxygen. Everything else is secondary. The infrastructure is crumbling,” Jameel said.

The previous record one-day rise in cases was held by the United States, which had 297,430 new cases on one day in January, though its tally has since fallen sharply.

Television showed images of people with empty oxygen cylinders crowding refilling facilities as they scrambled to save relatives in hospital. In the western city of Ahmedabad, a man strapped to an oxygen cylinder lay in the back of a car outside a hospital as he waited for a bed.

Reacting to the development in a piece published in Economic Times, the Executive Chairman, Healthcare Firm Biocon & Biocon Biologics, Kiran Shaw, said that what was being experienced across the country was not expected.

“We never thought a second wave would hit us so hard. Complacency led to unanticipated shortages of medicines, medical supplies, and hospital beds,” he wrote.

Delhi Health Minister, Satyendar Jain, said that there was a shortage of intensive care unit beds, with the city needing about 5,000 more than it could find. “We can’t call this a comfortable situation,” he told reporters.

Similar surges of infections elsewhere around the world, in South America in particular, are threatening to overwhelm other health services. India has launched a vaccination drive but only a tiny fraction of the population has had the shots.

Authorities have announced that vaccines would be available to anyone over the age of 18 from May 1 but India won’t have enough shots for the 600 million people who would become eligible, experts say.

Health experts said that India had let its guard down when the virus seemed to be under control during the winter when new daily cases were about 10,000, and it lifted restrictions to allow big gatherings.