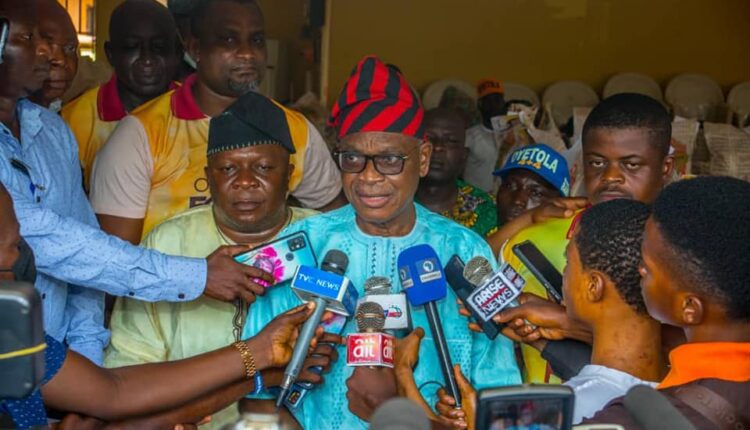 The Governor of Osun, Adegboyega Oyetola has disclosed that his administration’s Food Support Scheme had fed over 240,000 citizens of the state so far, adding that the scheme also helped to stimulate Osun economy as local productions of goods had been tremendously boosted to enhance the socioeconomic activities in the State.

The initiative, Oyetola said, has impacted greatly the lives of the beneficiaries, particularly the vulnerable citizens ranging from the aged, the windows, people living with disabilities, youths, among others, with the multiplier effect on the status of the state’s economy.

Speaking during the 8th edition of the distribution of the food items on Monday, Oyetola, who was represented by the Secretary to the State Government, Wole Oyebamiji, said that his administration has been gradually recording huge success in its frantic efforts to boost local food production, achieve food security and turn Osun to food basket of the Southwest region.

He said that ‘Osun Food Support Scheme’ to mitigate the adverse impact of the coronavirus pandemic on 30,000 vulnerable citizens on a monthly basis, adding that beneficiaries were drawn from the nooks and crannies of the Ssate using the World Bank-sponsored Social Register, saying the initiative was part of his promise to prioritise the welfare and the general well-being of the people

“This is the concept of Governor Adegboyega Oyetola who believes vehemently in the welfare of the people. As we all know, since the inception of this Administration in the last three years, salaries and pensions are being paid regularly while health sector and road infrastructure are in place. In addition to these initiatives, the concept of Osun Food Support Scheme came which saw 30,000 vulnerable citizens being given foods monthly.

“We know the foods given can not last anybody for a month, but it is still a taste of dividends of democracy. We know that by the Omoluabi ethos prevalent in Osun, it is very difficult for a vulnerable who is given a bag to eat it alone; a minimum of two or three other relatives will share from it.

“We are doing the 8th edition this month and as we promised at the inception of this Scheme, the gesture will continue. As it is, over 240,000 citizens have benefited from this Scheme. The number is obviously more as every beneficiary will share with their neighbours and extended families. We can’t therefore really quantify the actual number of the beneficiaries.

“We are working hard to ensure that the food items get to the targeted beneficiaries through the efforts of the distribution committee. There is a list of beneficiaries with their telephone numbers and contact addresses,” he added.

In his remarks, the Commissioner for Regional Integration and Special Duties, Engr. Olalekan Badmus, commended the initiative which he said had made meaningful impact on the lives of the people. According to him, the Scheme has been designed with a view to effecting meaningful impact and adding value to other sectors of the economy, particularly the agriculture and small scale enterprises.

Speaking on the fund being expended by the State Government on the Scheme on a monthly basis, Badmus noted that an average of N100million is being spent on a monthly basis. He said that the state has injected about N800million into her economy since the commencement of the programme in the last eight months.

“This initiative has been very impactful and if you look at the the total integration of the process, you will agree with me that different lives have been touched through this programme. Apart from the products itself, we have people that are doing the layoffs and those that are doing the uploading and offloading as well as the distributors that we are buying the products from.

“So, you will see that it has touched different lives. As of today, we have different people that have come to pick these foods from different places. From what we have, the programme costs us an average of 100 million naira every month, and this is the 8th edition. As it was emphasised before, our effort is actually on the impact on the people particularly the vulnerable citizens and poor of the poorest.

“We have taken a step further by improving on what we are presently doing to reach more people through well- coordinated efforts. We have done 210,000 already and with additional 30,000 today, it means that we have reached 240,000 beneficiaries and households.

“The beauty in this is that each of the households has minimum of two persons benefitting from the scheme on a monthly basis. We are also glad about the feedback being received from the beneficiaries as reflected in the prayers being offered to show their gratitude. We have the data and records of the beneficiaries of these foods and we do the random verification to confirm the receipt of the foods”, he added.