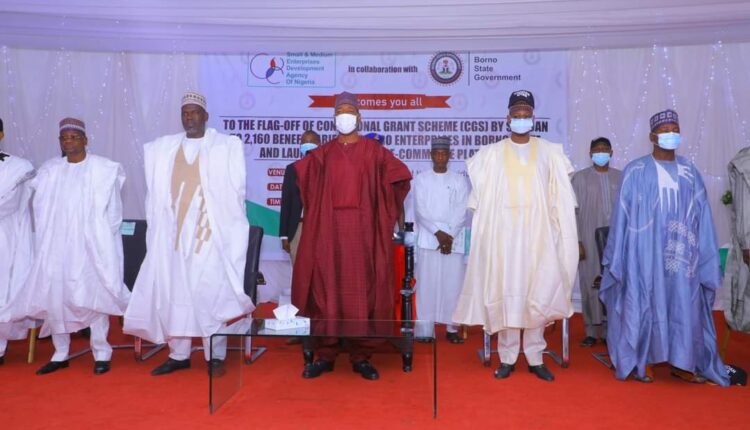 The Borno State Governor, Babagana Zulum, has launched the 2021 Nationwide Conditional Grant Scheme (CGS) provided by the Small and Medium Enterprises Development Agency of Nigeria, (SMEDAN) with aim of boosting businesses affected by insurgency across the state.

As stated, no fewer than 2,160 entrepreneurs benefitted from the scheme with each getting N50,000 to enable small scale entrepreneurship combined with capacity building, workspace, technology and delivery of post-intervention support services.

The governor who launched the intervention on Friday in Maiduguri noted that his government was committed to creating more employment opportunities to the teaming unemployed youths and to expand their sources of income, especially for women by reducing unemployment rate to the barest minimum in the state.

“We are here today witnessing the flag off of this very important scheme to 2,160 beneficiaries to the Micro Enterprises platform. It is common knowledge that insurgency in Borno State has brought untold hardship to our people and Small enterprises have suffered the most. The most important thing is not only the disbursement of grants, but financial inclusion”, Zulum noted.

The SMEDAN Director General, Dr. Dikko Radda, said that the agency chose Borno State as the focal point of the flag off for the entire nation to complement the state’s efforts at transforming the SMSE sector while coping with impacts of crises in the region in the last 12 years.

The DG further explained that the objective of the scheme includes moving micro enterprises from the informal to the formal sector, creating jobs, wealth and alleviating poverty in the society which is capable of reducing insecurity in the country.

He further added that the objective also includes enhancing the competitiveness of enterprises towards meeting national, regional and global standards, improving the internally generated revenue of the three tiers of government across the country; thereby reducing over-dependence on oil revenue and improving the human, technological and financial capacity of operators of micro enterprises.

Meanwhile, Zulum also launched the Borno State E-commerce platform developed and adopted by the Ministry of Higher Education, Science, Technology and Innovation during the flag off of SMEDAN’s conditional grant scheme.

The Borno E-commerce platform was designed by the state’s Ministry of Higher Education, Science, Technology and Innovation on the Android Operating System. Zulum said that his administration was committed to developing business enterprises in the state, especially through engaging several youths in various employment platforms to make them self reliant by disbursement of more than 3 billon naira.

The governor also noted that the administration has invested in many new vocational training centres and has revived old ones to rekindle SMSEs in the state by establishing sustainable businesses of their own.

The governor announced that a sustainability development agency would be created in the near future with the aim of developing a vanguard for rural industrialization and poverty reduction to enhance livelihood of the people.

The governor concluded by urging the SMSEs artisans and technicians to register with Borno State E-commerce in order to explore the various economic opportunities and have the knowledge on advertisment and other technologies in order to boost their trade.