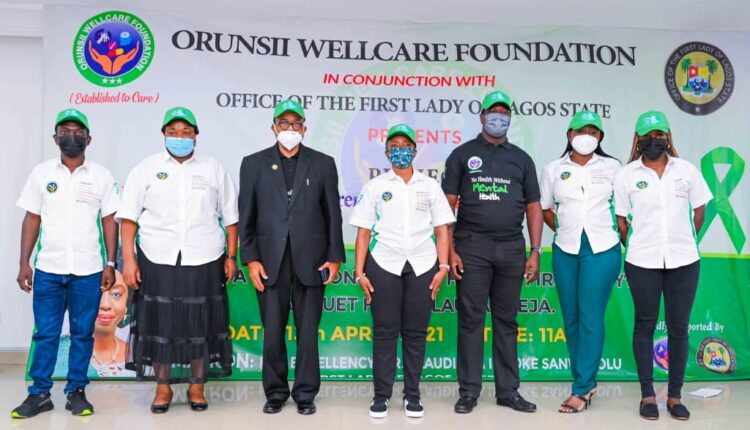 Atleast 20 percent of the over 20 million residents of Lagos have been discovered to be suffering from different mental health challenges and unaware of their ailment across the state.

And these set of Lagosians have been discovered not to know where to seek cure for the ailment and rather often use alcohol to subdue the pain that come from it.

The statistics were revealed by health experts during a press conference organized by Orunsii Wellcare Foundation in collaboration with the Office of the Lagos State First Lady, Dr. Ibijoke Sanwo-Olu, to highlight the importance of Mental Health and the need to create awareness, Ibijoke re-emphasize the need for people to prioritize healthy lifestyles.

Revealing the statistics yesterday, a Consultant Psychiatrist and Psychologist, DR. Olayinka Jibunoh, added that 40 percent of people globally currently need help for their mental health and do not know where to access quality care.

Jibunoh said: “Mental health applies to every single one of us. It is our psychological and emotional wellbeing. It is the way we think and feel on the inside which manifests in our behaviours and shows in our ability to function within the family, occupationally and socially.

“No one is immune to the effects of a neglect of their mental health. This project, MHADE in Lagos aims to provide support when needed by our friends, families and colleagues”, she added.

Expressing displeasure over the development, Sanwo-Olu appealed that Nigerians should pay close attention to their mental health as much as they do often with physical health.

She argued that it was medically possible for someone to appear physically fit but mentally sick to effectively reason on issues affecting his immediate environment.

She lamented that despite the importance of mental health, awareness is abysmally low, thus necessitating a deliberate measure towards bringing to the front burner the pertinent factors relating to mental illnesses in Nigeria.

“There is also a need for a clarion call on the people, more than before, to pay close attention to their mental health as much as they do to their physical health. The truth is, it is medically possible for someone to appear physically fit but mentally sick.

“According to World Health Organization (WHO), Nigeria has Africa’s highest caseload of depression, and ranks 15th in the world in the frequency of suicide. The number of Psychiatrists in the country has also been established to be a far cry when juxtaposed with the percentage of mentally ill Nigerians who need such medical care.

The first lady explained that the staggering reality certainly pointer to the fact that all hands have to be on deck towards improving the help-seeking behavior for emotional disorders amongst Nigerians and ultimately to de-stigmatize mental disorders in the country.

“It is particularly commendable that Orunsii Wellcare Foundation, which is a not-for-profit organization set up to promote and support projects that are focused on uplifting the wellbeing of the people, is taking the lead through its flagship project tagged: “Mental Health Awareness, De-stigmatisation and Enlightenment (MHADE) in Lagos State.”

“Aside the enlightenment campaign, the Foundation has also lined up a special training programme for volunteers and field officers, with the overall objective of playing up the huge burden and multidimensional effects of Mental Health on individuals, families and communities.

“The truth is people have different ways of responding to factors that have the capacity to trigger mental disorders. For instance, during the lockdown which was necessitated by the Covid-19 Pandemic, we had the Mental Health of a lot of people declining to the lowest ebb, which resulted in a worrisome spike in rape cases, domestic violence, and other anti-social behaviours”.