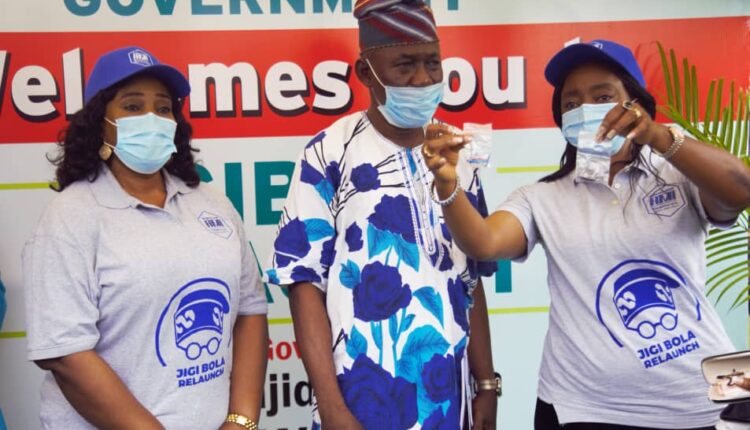 The First Lady of Lagos, Ibijoke Sanwo-Olu, has said that the re-launch and expansion of an over 20 years free healthcare initiative, Jigi-Bola  Health Mission, was to further strengthen healthcare delivery to grassroots across the state.

Sanwo-Olu explained that the initiative designed to cut across the 20 Local Governments and 37 Local Council Development Area (LCDAs) would include early detection of eye conditions that may lead to blindness; eye and ear health education; free eye surgery and treatment; and distribution of hearing aid.

The wife of the state governor, who stated this at the relaunch of the free sight and hearing aid programme of the State Government, explained that through the initiative, many that could not afford to visit consultants for the healthcare delivery covered under the programme would have the opportunity to get their challenges addressed.

At the event coordinated by the Ministry of Local Government and Community Affairs, she hinted that the statistics been published by international health organisations on the country and global state of care covered by the programme were also reasons for the government relaunch and expansion of the initiative.

Quoting WHO, she said globally, at least 2.2 billion people have a near or distant visual impairment, adding that in at least 1 billion or almost half of these cases, visual impairment could have been prevented.

Sanwo-Olu stated that in Nigeria today, according to International Centre for Eye Health, it is estimated that 2.7 million adults aged 40 years and above have a moderate visual impairment and an additional 400,000 adults are severely visually impaired.

The first lady explained that determination of the Governor Babajide Sanwo-Olu’s administration to correct the narratives was a clear testament of its priority for all aspects of healthcare delivery within the state.

“Twenty years ago, former Governor of Lagos State, Asiwaju Bola Ahmed Tinubu conceived an innovation to improve the vision of those who were visually impaired.

“In the year 2001, Jigi-Bola, an initiative borne out of the concern to reduce the negative effect of preventable visual impairment on residents of Lagos State was launched.

“During this programme, free eye screening was administered, while free eyeglasses were given to beneficiaries. At certain times, patients with eye conditions requiring surgical operations were attended to at no cost by the Lagos State Government.

“Today’s event, therefore, is a celebration of one of the legacy grassroots outreach programmes of Asiwaju Bola Ahmed Tinubu. In addition to giving free eye care services, this Jigi-Bola Re-Launch Initiative has gone a step further by distributing Hearing Aids. Hearing loss or hearing impairment is the most prevalent sensory disability globally and a condition that is a growing concern,” she said.

Sanwo-Olu, meanwhile, hinted that prior to the official relaunch, a team of Medical professionals including Doctors, Nurses, Optometrists, Audiologists, Health Records Officers, among others, had been engaged to screen eligible patients for the prescription glasses and hearing aids in conjunction with a Non-Governmental Organisation, BOSKOH Lagos Healthcare Mission International.

Also, the Oba of Lagos, Rilwan Akiolu, commended the state government for relaunching programme which he described as one that would give many across the state opportunity to get services that may be previously hard to get.

While stressing that the initiative was laudable and must be embraced by all, Akiolu called for a proper enlightenment campaign to let the people know the benefit of the Jigi-Bola initiative so that they could benefit maximally.

Corroborating the monarch, a former lawmaker, Anthony Adefuye, said the Jigi-Bola programme which gained instant traction and immediate acceptance, during the administration of Tinubu, became a household name on everyone’s lips.

He said the Jigi-Bola was being resuscitated, to bring back its old glory and to put smiles on the faces of Lagosians, particularly those at the grassroots across the state.

“Jigi-Bola is here again, dusted and fine-tuned, to achieve what it achieved in the past and even more, for the benefit of the good people of our State,” he said, while commending the inclusion of Hearing Aids, which would bring succour to many Lagosians who are hearing impaired. Young or old, when hearing devices are used, they go a long way in mitigating the condition of the challenging ones,” Adefuye added.

Over 250,000 Lagosians to get free eyeglasses, hearing aids, other supports