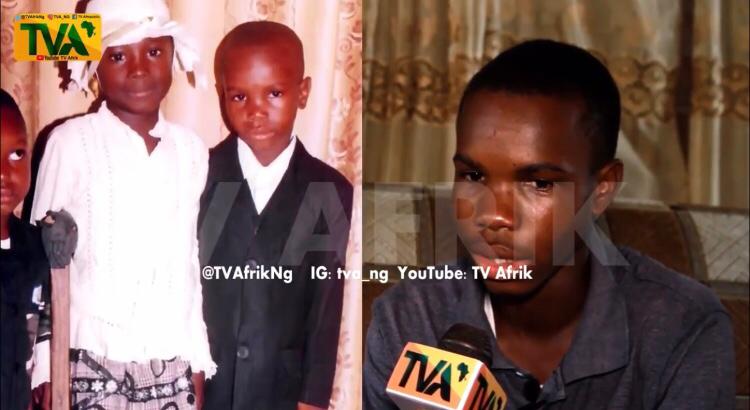 Contrary to the emotional life stories narrated by Lagos amputee sachet water hawker, Mary Daniel, that attracted N25 million donations from Nigerians and abroad, the brother to the 26-year-old lady, Godswill Onu, has faulted her narrations and claimed that their parents never died during an accident as earlier portrayed by the sister.

Godswill added that though their mother had died but was not through any auto crash as earlier claimed by her sister and that he and Mary (Ojonugwa) never had the opportunity to live under the same roof with their father even before their mother passed on.

He noted that their mother died in 2012 and that before her death, she never told them that their surname was Daniel rather, the birth registration made for the amputee was Ojonugwa Onu and not Mary Daniel.

The brother to the amputee in an interview with newsmen further narrated that their mother died six years after Mary’s leg was amputated during their stay in a community within Katsina-Ala Local Government in Benue State, where their mother gave birth to them.

Our father and mother didn’t die during an accident, Amputee hawker’s brother shed more light on the unraveling story pic.twitter.com/8kljEO83kF

Godswill, who spoke alongside other relatives including the grandmother to the sachet-water hawker and single mother, hinted that Mary’s leg was amputated in 2006 following severe injuries suffered after a truck tire she was sitting on exploded in Benue.

He said: “It all started in Katsina-Ala back then in 2006. On that day, I and Mary were playing on a truck tire and our aunt instructed that we leave because it is not safe. But we did not yield immediately. A few minutes later, I left but Mary stayed back. Later I returned and told her that we should leave and play behind the flowers closer to the scene; still, Mary declined. After I left, the tire exploded, attracting the attention of my grandmother and my aunt”.

The brother added that she suffered severe injuries on the right leg and that after the medical doctor diagnosed her, they insisted that Mary’s leg must be amputated in order not to affect her health.

According to him, and six years later, my mother died, particularly in 2012 and since then, we have been living peacefully before now that the untrue story came out.

Godswill’s revelation came barely two days after Mary was handed over by Lagos State Government, who had kept her in their custody for two weeks, to Non-Governmental Organisation (NGO) and Kogi traditional leaders after realizing that the stories were staged and untrue.

Taking over the discussion from the brother, Mary’s grandmother, Jumai Abu, who stressed that her name is Ojonugwa (meaning thank God) added that the accident occurred on Friday in 2006 at a vulcanizer workshop in Kastina-Ala.

While noting that her granddaughter’s story was untrue, Abu argued that she, the amputee aunt, and the late mother raised money to pay for the operation fee after his father refused to pay the fee.

“After raising the money, they asked that who will sign the documents for the operation and her late mother appended her signature on it. The operation was concluded the third day and when she discovered that her second leg had gone, Ojonugwa (Mary) cried and asked several times why and second her leg kept”. 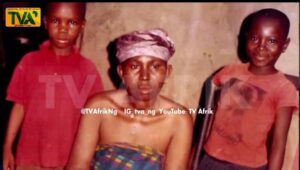 Her aunt, Blessing Adedamola, while stressing that Mary’s story was untrue, hinted that the funds for the medical bill were sourced from relatives including her who had to withdraw all her savings.

“After the accident, raising money was difficult and I could not stand as well as watch my mother and aunt go around to source for funds. And that is why I had to quickly go to the bank and withdraw the money I had been saving after finishing my secondary school to aid my varsity admission. Then we have only one bank in Katsina-Ala, so I had to visit the bank to withdraw the money I have saved and gave it to my mother to complete the payment of her bill”, she added.

Meanwhile, in spite of the story by the relatives, the Lagos State government had continued to insist that Mary never provided wrong information about the status of her parents, who before now she claimed that died during an auto crash.

Even after instructing that the N25 million donated by Nigerians must be spent in the state, the government also denied that it has not withheld the fund donated to the lady as a result of the true status of her parents.

The government made the claim after handing her over through Office of Civic Engagement, to a committee comprising of the representatives of the Ministry of Justice, Ministry of Youth and Social Development, an NGO, and the leader of Igala community in Lagos State, Sanni Ejima in the presence of the Divisional Police Officer, Alausa and representative of the Commissioner of Police, Lagos State Command.

At the handing over ceremony, the special adviser to the governor on Civic Engagement, Aderemi Adebowale, disclosed that the state government will continue to protect all residents in the state, especially the vulnerable.

It would be recalled that the amputee, whose story has attracted widespread attention, particularly in social media, has been in the safe custody of the state government in the past two weeks.

Adebowale said the government took the step to shield Daniel from possible fraudsters who may target the funds donated to her by well-meaning Nigerians.

According to the Special Adviser, the ultimate desire of the state government is to ensure that Daniel becomes a civically responsible citizen in the state, adding that “she now has the resources to take care of herself and her baby and have a new lease of life”.

Adebowale, while handing over Daniel to the leader of the Igalas in the state, explained that the police were brought in to the handing over to demonstrate that the state had taken good care of Daniel while in its custody and to ensure her safety thereafter.

Adebowale added that the committee is to oversee Daniel’s rehabilitation and ensure that the donated funds are judiciously utilized in the improvement of her standard of living and that of her baby.