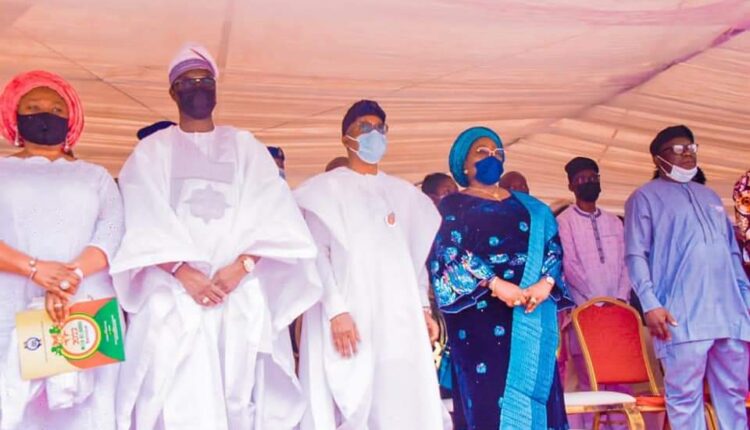 Ahead of governorship election in Osun State,  civil servants across ministries, agencies and parastatals have organized inter-religious prayer for success of the state’s Governor, Gboyega Oyetola, administration, and victory during forthcoming election in the state.

Besides,  the prayer session was also said to have been targeted by the workers to welcome and usher in the governor into office in 2022, after Yuletide in a grand display of pomp and circumstance.

The workers, who lauded the governor’s contributions on welfares and development of the civil service in the state, assured Oyetola of their supports and that solidly behind him for his second term ambition.

The workers who received the governor at the Main Gate of the State Government Secretariat on Tuesday, state that Oyetola’s leadership style has provided right direction for the state’s development by running an inclusive administration that has not left anyone out.

The workers, led by State Chairman, Nigeria Labour Congress (NLC), Comrade Jacob Adekomi, and  Head of Service, Dr. Festus Oyebade, in their hundreds, expressed satisfaction on governor’s level of patriotism for the state by ensuring salaries, as well as other welfares of civil servants, were being paid as at when due.

Through various inscriptions such as “Osun Workers are saying Thank You”; “We are solidly behind you and your administration”; “Thank You for being there for us”, among others, the Osun state’s workers demonstrated their gratitude to Oyetola with claims that the governor was a people-oriented person.

Speaking at the prayer session, Adekomi attributed the workers’ gathering for the governor to the continued support they had been receiving from Oyetola since his assumption of office in 2018 and that were ready to reciprocate same gesture towards the governor.

Adekomi, who described Oyetola as the best helmsman and an astute manager of human and material resources, said that the performance recorded so far by the state workforce remains unquantifiable under the governor’s watch.

“As workers, we are very happy today because Mr. Governor has been very attentive to our plights. He has been listening to agitations and demands. As you can see, another innovation has come our way today as Mr. Governor has donated cars to some workers, the first of its kind in the history of the State since its creation.

“If we are to begin to mention what he has done for us, we will not come to an end. Though we still have some other agitations, so far so good, Mr. Governor has done excellently well for the workers. That is why we workers in our volition came out en masse to receive him warmly back to office after the Yuletide celebrations. I urge my colleagues at various levels to continue to give their support to him and his government as he continues to champion our cause,” Adekomi added.

In his remarks, Oyetola described the workforce in the state as the brain behind the success story of the administration as their labours, passion, discipline and conviction constituted the wings upon which the administration flies in fulfilling its sacred mandate.

He implored them to commit to doing better, improve their personal and collective productivity, and rededicate themselves to the Omoluabi ethos.

Oyetola described year 2021 as one in which the state recorded very significant achievements that made life better for the people and placed them on a surer footing of sustainable economic development.

He said that the preceding year also brought the citizens nearer to their envisioned destination of an Osun that is absolutely prosperous and a pride to all and sundry.

He noted that his administration has kept faith with his electoral promise of putting workers’ welfare first and ensuring that they are duly compensated for their invaluable contributions.

“I feel particularly gratified that in you our hardworking, sacrificial and resilient workers, we have found dependable allies in our focused quest for the transformation of our dear state. Indeed the journey of the last three years plus since our assumption of office cannot be told without taking stock of the invaluable support we have enjoyed from you.

“Your labours, passion, discipline and conviction in our Development Agenda constitute the wings upon which our administration flies in fulfilling its sacred mandate.

“As we begin the journey of a new year, which, in many ways, is another defining year for our state, I urge us to commit to doing better, improve our personal and collective productivity, rededicate ourselves to the Omoluabi ethos that define us as a special people and race.Let us shun indolence under whatever guise and reposition ourselves for a diligent and a more fulfilling work life,” the governor said.

In their separate lectures, the Chief Imam, Federal Polytechnic, Ede, Imam Taofeek Abdulhammed and State Chairman, Christian Association of Nigeria, Bishop Amos Ogunrinde, admonised the people to always put God first in whatever they do.

The clerics who advocated peaceful coexistence called on the people to see their positions, powers and other worldly things as ephemeral, saying they must be conscious of the day of accountability and stewardship before the Creator.

Lagos Govt. may ban usage of disposable plastic items, others