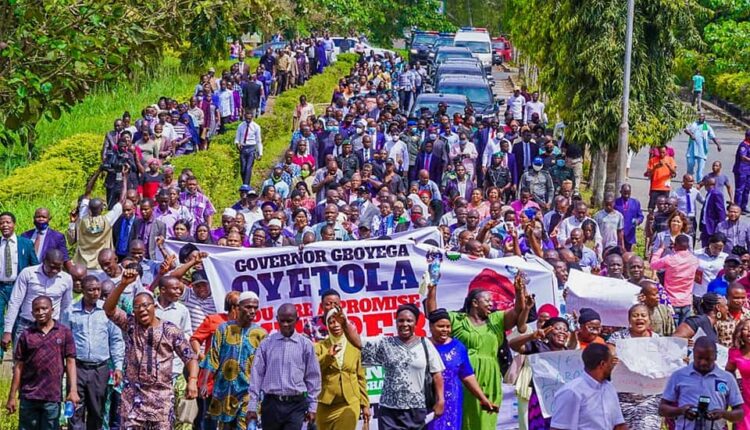 Share
Genuinely touched by approval of new welfare packages for all categories of workers in Osun State, civil servants under the employment of the state government have passed a vote of confidence on Governor Adegboyega Oyetola, describing him as a promise keeper.
The workers who went into jubilation over the new welfare packages also hailed the present administration for taking considering workers’ welfare as topmost priority since assumption of office in 2018.
The state bureaucrats who converged on the main entrance of the State Government Secretariat, Abere, Osogbo, on Monday, tumultuously welcomed Oyetola and his entourage as part of efforts to show their unreserved appreciation, unflinching support, and solidarity for his administration.
The jubilating workers who trekked with the governor from the main entrance gate to the Governor’s office were armed with placards with different solidarity inscriptions to confirm their support and cooperation with the present government.
Speaking on behalf of the workers, the state’s Chairman, Nigeria Labour Congress (NLC), Jacob Adekomi, applauded the government for coming to their aid at the most critical period of needs.
According to him, the new development would go a long way to re-energise the workers’ strength, stimulate their level of productivity, and by extension register a significant improvement on the economy of the State.
“To whom much is given, much is expected. Actually, we are here this morning to appreciate Mr. Governor for what he has done and still doing for the generality of the workers in the State. You will recollect that in 2012, embargo was placed on Annual Salary Increment. Also, embargo was placed on promotions and conversions. The last time workers earned all these benefits was in 2012. 2018 promotions that were done for us were nominal but not monetised.
“But with this agreement and subsequent approval of Mr Governor, he has succeeded in monetising the 2018 promotions hitherto that we were collected which had not been monetised. Also, Mr Governor had successfully lifted embargo on other promotions which are 2019 and 2020. He has implemented National Minimum Wage and also, he has lifted embargo on conversions for all categories of workers in the state. In fact, a lot of goodies and packages for the workers which we have been agitating for have been attended to. As you can see, we are extremely happy for the kind gesture extended to us by the government, he said.
Responding, Oyetolabappreciated the workers for their continued show of love, solidarity, high sense of diligence to duty and commitment to the advancement of the state since the inception of his administration.
Oyetola who described Osun workers as the most diligent and cooperative proletariats said he has always derived happiness and rest of mind in the calibre of individuals that made up the state’s workforce.
He reaffirmed his administration’s commitment to continue to champion the workers’ welfare and things that would bring all-round development to the people of the state in general and workers in particular.
“Although what it was did was not particularly convenient for us, we did it as part of our commitment to the welfare and well-being of our workers. As a responsible and responsive government, it is our belief that workers should be able to get whatever that is due to the. That was why we deemed it fit to do all these for them.
“All I expect from them is an increase in productivity. I expect us to work together to increase our revenue as we all know that the State needs money to finance all its commitments. We need to work hard to move the State forward. The wage bill is huge, it is a tough thing to do. But when you look at career advancement, we will know that it is a necessity. We believe strongly that with determination, we will get over it.
“As long as the revenue of our State improves, we can still do more but we should all work very hard. As we said before, if we have the opportunity to increase our revenue, no doubt, we will jerk up the workers’ welfare packages”, Oyetola said.

It will be recalled that Oyetola had last week Friday announced the approval and immediate implementation of the new national minimum wage for all categories of workers in the state.

He also lifted the embargo on the protracted Annual Salary Increment, Promotions and Conversions which had been withheld since 2012.