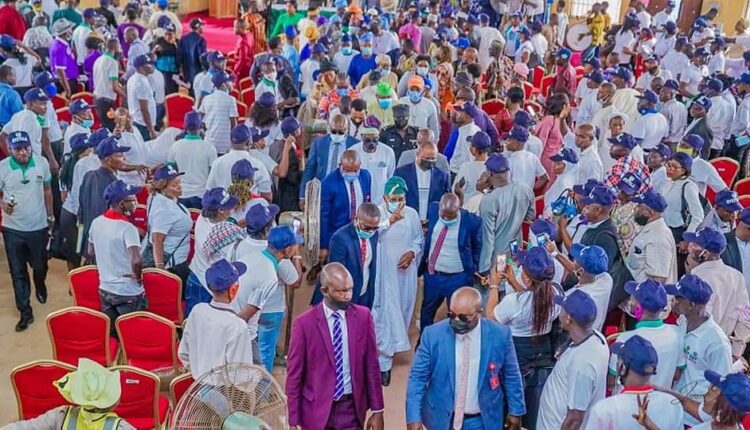 Ahead of 2023 governorship election in Osun State, members of Nigeria Union of Teachers (NUT) Osun Chapter have passed a vote of confidence on the administration of Governor Adegboyega Oyetola for prioritising workers’ welfare and well-being, particularly the teachers in the state.

The over 11,000 teachers in the state’s workforce attributed their solidarity and endorsement of the governor to his rare passion and love for education, welfare and well-being of teachers in particular, and socioeconomic development of the State in general.

The ecstatic teachers whose appearance reflected unflinching support to Oyetola’s administration wore caps with the inscription, “NUT for Oyetola” and gave their unalloyed support during the inauguration of the newly-elected executive members of the NUT in the state on Wednesday at the Staff Development Centre, Osogbo.

Speaking on behalf of the teachers in the state, the state’s NUT Chairman, Comrade Adekomi Adekunle, said that their solidarity and endorsement of Oyetola were informed by the numerous support and honour the administration has accorded the union. Adekunle who described the achievements of the administration across sectors, particularly the education sector, as unprecedented, disclosed that the union was resolved to rally support for him to return for second term.

According to him, the reason for this programme is to honour the man who has honoured us. It is to give honour to whom honour is due. Oyetola must be honoured for his good works. No doubt, Oyetola has been performing wonderfully well since he assumed office as the Governor of our dear State.

“It is for this noble gesture that we teachers deem it fit to honour him for taking our welfare as a priority and for giving us the pride of place that we deserve as teachers in the State. It is on record that our Governor deserves to be celebrated not only for paying our full salaries as and when due without any hitch but aso for ensuring that no worker suffers anything no matter what since he became the Governor.

“We have seen in him a true leader and he has demonstrated to us that he is a worker-friendly Governor. That is why he has been fulfilling all the promises he made. The governor has brought genuine change to all sectors, particularly the education sector as seen in the massive transformation that the sector has witnessed in the almost three years of his Administration.

“So, we need to appreciate him. That is why we organised this programme. Oyetola is a man of his opinion, a man of his word and a promise keeper. That is why we decided that we cannot be left out in the game to let him come back again for second term. We are resolute to rally support for him so that he can win his second term election and return as Governor to serve us more.

“There is need to support him and we are committed to canvassing support for him from our people. We are going to spread the gospel of his good works across the State, particularly within our members and the entire workforce as part of efforts to register our appreciation and solidarity for his government that has done us well and made us proud.”

Speaking on the occasion, Oyetola noted that education remains the driver of his administration’s Development agenda, adding that he was committed to making education the bedrock of socio-economic development of the state. The governor said these branches executive members of the Nigeria Union of teachers are an amalgam of the leaderships of teachers at the primary and secondary levels, the two arms which represent the foundation of education in the state.

He said that his administration had painstakingly designed a template to reposition education and make it serve as a catalyst for building a strong, prosperous and sustainable State. Oyetola who assured his commitment to continue to govern Osun with the utmost fear of God said, “the welfare of workers and other citizens in the State is of topmost priority to me and our administration and it shall remain so for now and even in the future.”

While applauding the NUT members in the state for their efforts to improving on the quality of public education, Oyetola urged them to rise beyond the flashes of achievements to make excellence culture and a way of life saying, “we would be close to our dream when we lead national examinations annually and when scores of our pupils achieve recognition at same examinations.”

He said that his administration would continue to do its best to provide facilities and inputs that would make them to deliver the set goals of revamping the education system through the renovation of schools, provision of relevant equipment, enthronement of discipline.