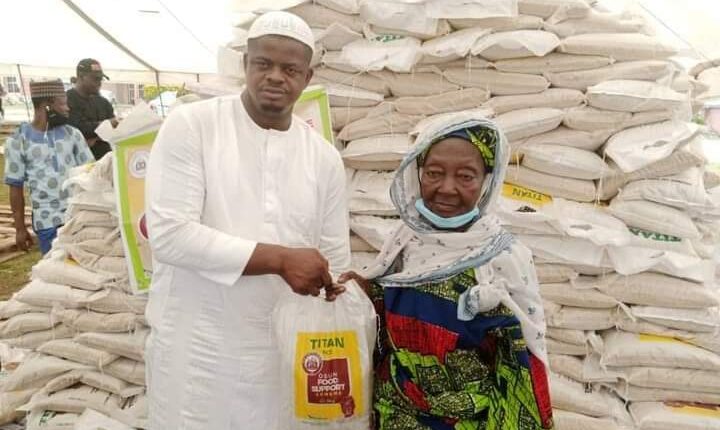 The beneficiaries of Osun State Government’s Food Support Scheme have commended Governor Gboyega Oyetola-led administration for its thoughtfulness and placement of citizens’ welfare and well-being as priority despite economic challenges being witnessed across Nigeria.

The ecstatic beneficiaries also lauded the administration for keeping faith with its elctioneering campaign promises, and for sustaining the food support scheme which was flagged off in April, 2021.

Some of the elated beneficiaries who couldn’t hide their enthusiasm, said that the distribution of the food items for the second month has proved that the administration was committed to sustaining the scheme.

In his remarks, the representative of the Ohanaeze Ndigbo (Igbo community) in the state, Chinaka Ben, hailed the government for extending the good gesture to them, adding that such was remarkable with the country’s current reality.

Ben who expressed satisfaction on the distribution method employed by the state government toward ensuring equity and fairness said, “we are indeed happy to be part of the beneficiaries of the masses-oriented programmes of Osun.”

Also, the Osun Miyyeti Allah Public Relations Officer, Muhammed Abdulah, commended Oyetola for living up to his constitutional responsibilities since assuming office and the kind gesture extended to his people,

He added that the initiative shows that the governor remains a detribalised Nigerian and a true leader whose passion for the welfare of his people was second to none when compared to the implementation of his policies and programmes so far.

Abdulah said that the initiative was first of its kind in the history of the state, noting that the governor had made what seemed impossible to be possible through the initiative.

He reiterated his group’s unflinching support to the governor and his government saying, “it is a surprise that despite the present economic realities, a government will still be feeding the masses as done by the Osun government under the leadership of governor Oyetola.”

According to him, the administration has made unprecedented transformation and become a pace-setter in human capacity development as evidenced in the positive impacts of its policies so far.

Receiving her package, a beneficiary, Kafayat Olaniyi, expressed delight in the social intervention programmes of the state government, describing them as “masses-oriented.”

The widow noted that the government had met her at the point of her need with the rice she received, just as she reiterated her support for the administration.

She added: “I am proud of this Administration. I am extremely happy not because of any other thing but because we have a government that feels the masses pulse and sensitive to their welfare and well-being.

“It is not about the volume of what was given but the spirit and positive intent behind it. We have never had it so good like this. I thank our Governor for remembering us in all he does, particularly for deeming it fit to implement this noble programme.

“This is a welcome development and I promise that we the women, particularly the windows and the aged who have benefitted from this good gesture, would continue to support him and his Administration.”

In his remarks, the Commissioner for Regilonal Integration and Special Duties and Chairman of the Osun Food Support Scheme Committee, Engr. Olalekan Badmus, assured the beneficiaries of the government’s commitment to sustain the scheme.

Badmus said the that dministration of Governor Oyetola would continuously pursue policies and programmes capable of securing the people’s welfare and guaranteeing a better future for all.

“Recall that the Governor officially flagged off the scheme last month, 1st April 2021. We want to assure the public that the scheme is on course and the State steering committee shall ensure strict compliance and proper monitoring of the distribution channels.

“The government is committed to the people’s welfare and we shall stop at nothing to ensure that the needs and aspirations of our people are met and guaranteed,” he added.