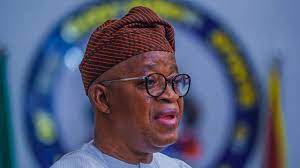 The Osun State government has mandated the Police to investigate the killing of a borehole drill operator, Kabiru Babai, who was allegedly shot by a policeman.

The Osun Police were said to have confirmed the arrest of the policeman, Moses Samuel who was in connection with the incident.

While reacting to the incident, the Governor of Osun State, Adegboyega Oyetola, through a statement by his Chief Press Secretary, Ismail Omipidan, condemned the killing, adding that the policeman should be made to face the law.

The governor called for the investigation of the circumstances that led to the event, adding that the state Commissioner of Police should ensure that the alleged killer faces the full wrath of the law.

Confirming the arrest of Sameul, the Police spokesperson, Yemisi Opalola, in a statement yesterday, stated that Osun State Police Command in its continued efforts to curtail all forms of indiscipline and acts of unprofessionalism, arrested the police officer, Moses Samuel who shot at the 33-year-old Babai.

“Investigation and disciplinary actions have commenced and the suspect will be arraigned in court after completion of the Orderly Room Trial. This, we hope, will serve as a deterrent to other officers like him.” he said.

As gathered, some youths were said to have protested in the Ota-Efun area of Osogbo after the policeman allegedly killed the drill operator and also shot a driver over a traffic incident.