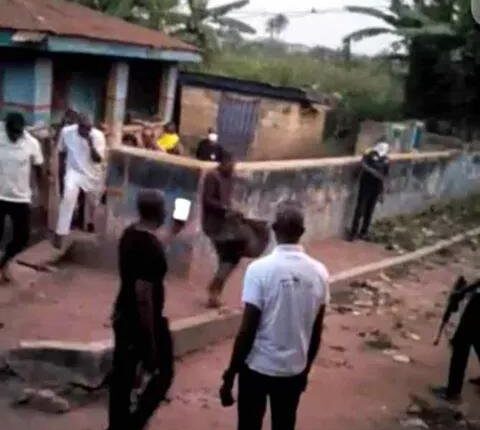 Residents of Yemoja in Iwo Local Government Area of Osun state was thrown into panic after personnel of the state’s Police Command arrested a notorious kidnapping gang said to have been terrorizing the area.

This is coming as the police also uncovered a den allegedly said to be their hideouts where rituals are performed with the human part of their victims.

As learnt, six fresh human heads and the decomposing corpse of a woman were said to have been recovered by the police operatives during the sting operation on Monday.

Trouble started when the gang kidnapped the son of a prominent politician in Iwoland, Tajudeen Akanbi, Adeolu Akanbi, and later killed the victim.

A source, who confided in The Guild, explained that the late Adeolu was declared missing about three weeks ago after which his family, including the police, began searching for him.

According to the source, the police were able to trace the circumstances of his missing by tracking his Phone set which led them to a Barber along Feesu whose arrest led to the revelation of other members involved in the evil act.

Furthermore, the source noted that the barber’s confession led the arrest of a Vulcaniser at Yemoja area and one Abere-ifa at Ajagba in Olaoluwa Local Government Area.

“After a series of investigations, it was discovered that the Barber lured Adeolu Akanji to the Vulcanizer house at Yemoja where he was killed and the parts sold to Abere-ifa.

“The police also recovered at Yemoja decomposing bodies of various victims including a woman that was declared missing some days ago,” the source said.

However, all the arrested suspects have been taken to the State Headquarters of Police in Osogbo.