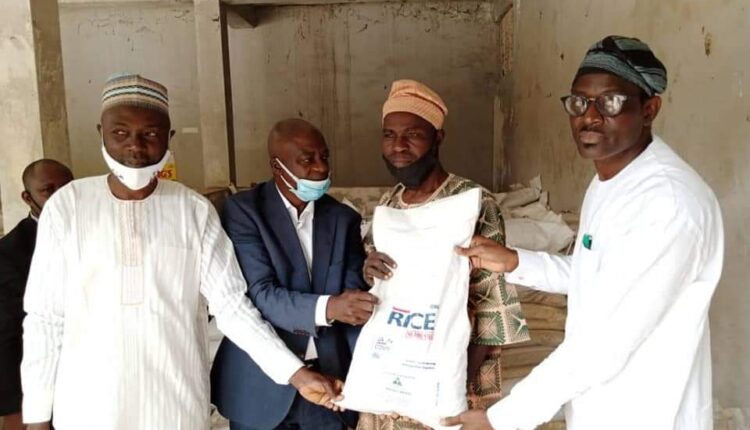 The Osun State chapter of the Nigeria Union of Pensioners (NUP) has commeneded the administration of Governor Adegboyega Oyetola for prioritising retirees’ welfare and well-being.

The retirees in the state also showered encomiums on the governor for counting them worthy of benefiting from the rice component donated to the State by the Private Sector Coalition Against Covid-19 (CACOVID).

About 4,000 pensioners across the state on Tuesday received CACOVID 10kg bags of rice donated to the state to cushion the adverse effects of the global coronavirus pandemic.

It would be recalled that the state government on Thursday last week commenced the distribution of CACOVID rice upon the receipt, as part of efforts to ensure onward distribution across the State.

A retiree, Alabi Rafiu, expressed profound appreciation to Oyetola for taking the general welfare of the citizens, particularly pensioners, as priority.

Rafiu who represented Local Governments and Primary Schools retirees, attributed the gesture to the love that the government has for the senior citizens, particularly the retirees and the vulnerable.

“I want to thank Mr. Governor for deeming it fit to incorporate pensioners into the State in the sharing of the rice component of the CACOVID palliatives.

“It is a great thing for us to be part of the beneficiaries of this kind gesture. We want to appreciate him for remembering us and we pray that God will continue to be with him, uphold him and grant him all he desires in life, most importantly, the required resources to run the State”, he added.

Another pensioner, Gbadebo Adegboye, appreciated the kind gesture of the state government over the palliative.

Adegboye who spoke on behalf of Ministries, Departments and Agencies (MDAs) and Secondary Schools pensioners, maintained that the gesture was a reflection of the passion which the government had for the retirees. He implored government at all levels not to relent in their support for the pensioners.

In his remarks, the Commissioner for Commerce, Industries, Cooperatives and Empowerment, Dr. Henry Olaonipekun, disclosed that the state had distributed over 30,000 out of the expected 40,000 10kg bags of the CACOVID rice so far.

He said that the State would not rest on its oars to ensure adequate distribution of the rest of the rice upon receipt, adding that the state was committed to continually upholding and guaranteeing the general welfare and well-being of the citizens.

“We are here to take care of the retirees in the continuation of the distribution of the rice component of CACOVID palliatives, and as you can see, it is the turn of general retirees, covering the primary schools, secondary schools, local governments, Ministries, Departments and Agencies.

“We have been taking on several other groups such as vulnerable people; members of the formal and informal sectors; artisans such as barbers, tailors, vulcanizers; farmers; market women; students; youths; traditional rulers; and community leaders, among others, since the beginning of the distribution.

“We have also taken care of other critical vulnerable people in line with our timetable; and today is the turn of the retirees across the State.