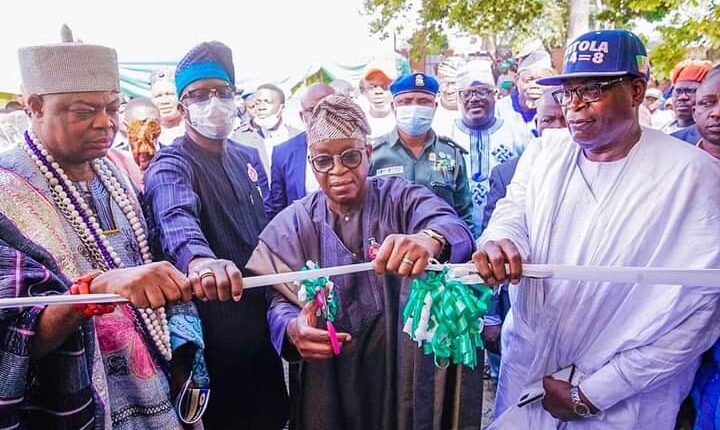 As part of moves to appreciate Osun State Governor, Gboyega Oyetola’s achievements in two years, monarchs in the state have endorsed the governor for second term despite having over 700 days left in his first term.

The endorsement, it was learnt, followed the monarchs expression of satisfaction with Oyetola’s leadership style, which they claimed, could be felt across the state through landmark developmental projects.

Expressing their support during the inauguration of ultra-modern markets in Kuta and Ile-Ogbo and the flag-off of sports academy in the latter recently, the Olowu of Kuta, Hammed Makama and the Olu of Ile-Ogbo, Abeeb Adetoyese, both commended Oyetola’s commitment to good and inclusive government.

The duo also expressed their reelection bid advocacy for the Governor as part of efforts to reciprocate the good works and tremendous achievements he had recorded in the last two years.

Speaking during the inauguration ceremony, Makama, commended the Oyetola-led state government for setting the pace in all the sectors, particularly in infrastructure development.

The monarch, who described Oyetola’s two years in office as most fruitful, said the governor had succeeded in setting the state on the path of socioeconomic and infrastructure development.

“I want to reassure you that we are solidly behind you and your government. Your good works have spoken for you and they will continue to speak for you. The tremendous achievements of your Administration are clear testimonies to ensure your reelection.

“You are ruling this State for eight years because you deserve a second term, and as a traditional ruler whose town and subjects have benefited greatly from the good works of your administration, we will continue to support your government to ensure your reelection. We will continue to key into your policies and align with your leadership”, the monarch assured.

Similarly, Adetoyese expressed gratitude to the governor for prioritising the welfare of the people of the town in the scheme of things.

He acknowledged the numerous government’s interventions, particularly in infrastructure, health, education and human capacity development, saying he and his subjects would continue to be grateful to the government for all he has done so far to impact their lives positively.

“I must commend your administration for all you are doing to reposition the State; you have done excellently well. We have been hearing and seeing your good works all over the place, particularly in Ile-Ogbo. We are confident that your second term is secured. By the Grace of God, you will rule Osun for another term after the expiration of this tenure,” Adetoyese said. .

In his remarks, Oyetola reiterated his administration’s commitment to championing things that would redefine the people’s lives and ensure the dividends of democracy.

He said the newly- commissioned markets were fruits of the “Thank You” tour embarked upon to know the yearnings and aspirations of the citizens.

According to him, the projects are central to the administration’s resolve to enhance the standard of living of the people of the communities, thus contributing to their socioeconomic and commercial life.

“We are garthered here to reap the dividends of the ‘Thank You’ tour that we embarked upon on assuming office two years to appreciate you for your support and to collate your needs as part of our inclusive approach to governance.

“These two events are targeted at women and youths who constitute a critical percentage and an overwhelming majority of the people and are undoubtedly central to our Development Agenda.

“The Market Complex should be a harbinger of improved opportunities for the women. I therefore implore our women to join thrift and cooperative societies and form new ones to expand their businesses and deliver prosperity and the good life to them and their families,” he said.

On the Sports Academy which was flagged off during the event, the governor said, “The academy will have 5,000 to 6,000 capacity stadium, 4 training pitches for track and field events with 1,200 seater, students classrooms and staff quarters, 18 holes Golf Course and multipurpose sporting arena among other world class features. The state will provide infrastructure, including road, power and water for the effective functioning of the academy.

“Economically, Osun is also strategically placed to benefit from it as raw talents from neighbouring South West States will be attracted to the Academy. It is part of our own strategy of engaging the youth in the aftermath of the #EndSARS protest.”