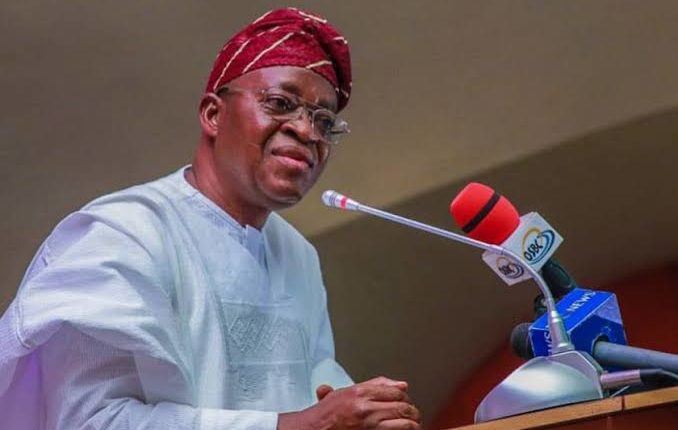 Share
By News Desk
Following confirmation of the second case of the deadly Coronavirus to Osun, the State Government has announced a total lockdown of the State beginning from Tuesday, March 30, to prevent its spread in the state.

Before the total lockdown, the government stated all land boundaries effective from midnight, Sunday, March 29, 2020, would be shut.

Announcing the pronouncement, the Governor, Adegboyega Oyetola, in a statewide broadcast on Sunday, emphasised that essential officials were exempted from the lockdown.

He described the decision as imperative in view of the devastating nature of the pandemic, adding that the first priority of any responsive and responsible government is to respond effectively to protect its citizens when an emergency occurs.

Oyetola who expressed sadness over the latest incident, reiterated that the decision remained the only way to go if the State was to contain the spread of the disease.

“Following a review of our current situation, we have in addition to the subsisting measures taken in the past one week, decided to shut down all our boundaries, effective from midnight Sunday, March 29, 2020. In addition, a complete lockdown of the State will come into effect from midnight, Tuesday, March 31, 2020

“We believe this is the way to go, if we must contain the spread of this virus. To this end, we urge citizens and residents to take advantage of the hours between now and Tuesday to stock up provisions that will last them two weeks in the first instance.

“During the lockdown, there will be no movement within the state. The closed boundaries also means there will be no inter-state movements. However, those on essential duties such as health personnel, fire service, environmental officials, security personnel, power and water supply agencies, media and telecommunication officers will be on duty. Also, pharmaceutical and medical outfits will be allowed to open.

“We have mandated and mobilised the State’s taskforce and security operatives to enforce measures to the letter. We, therefore, strongly advise our people to remain in their homes during the period of the lockdown.

“When an emergency occurs, such as the one at hand, the first priority of any responsive and responsible government is to respond effectively to protect its citizens. This is what we will continue to do”, Oyetola added.

The governor urged the residents not to panic by the new measures but continue to adhere to government’s instructions and directives on the need for them to continue to observe necessary precautionary measures, including regular washing of hands with water and soap and also maintain the prescribed social distancing.

He lauded the critical stakeholders led by the former Health Minister, Prof. Isaac Adewole; taskforce and health officers for their selfless service to humanity.