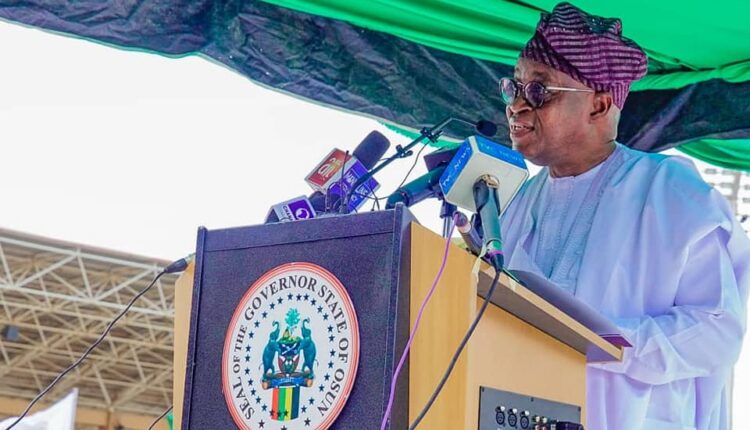 Osun State Governor, Gboyega Oyetola, has disclosed that plans have been concluded to empower no fewer than 2000 youths across the state through its new Cocoa initiative that would be unveiled by his administration.

He added that his administration was committed to supporting residents across the state, particularly the youths in boosting local economy, adding that the new cocoa initiative that would empower 2, 000 young farmers in Osun.

“In two days’ time, we will be unveiling a new Cocoa initiative, aimed at empowering 2, 000 youths. We are doing this in collaboration with Afex Commodity and the Central Bank of Nigeria. The aim of the programme is to bring rapid development to cocoa value chain and promote agro produce in the Cocoa producing states,” Oyetola stated this on Tuesday at the unveiling of Ekiti State Government Rice Pyramid Project.

He noted that the aim of the programme was to bring rapid development to the cocoa value chain and promote agro produce in the cocoa producing states, adding that the government has also been working hard to support the Maize farmers, cotton farmers and cocoa farmers to make sure that the Federal Government Anchor Borrower Scheme’s goals are realised even in the face of dwindling resources.

Oyetola, who described agriculture as the most critical sector and bedrock of socioeconomic development, said, “by the nation’s potential and history, agriculture remains a critical but missing mainstay that we must all as a nation and the constituent States join hands together to find and sustain.”

Furthermore, he said that his administration remained a critical partner of the Anchor Borrower Programme initiative as part of efforts to revamp the agriculture sector.

He disclosed that the rice component of the Osun Food Support Scheme was sourced from local rice sellers in order to encourage and empower local farmers in the State and beyond.

Oyetola said the scheme, which enables the state to feed 30, 000 poor and vulnerable persons, will ultimately support food sufficiency programme, as farmers will be encouraged to double their efforts while Government serves as the off-taker.

The governor commended President Muhammadu Buhari for graciously initiating the Anchor Borrower Programme to achieve food sufficiency in rice and other food crops, saying, “If, today, Nigeria has moved significantly to food sufficiency from where it was in 2015, rice production plays a significant role.”

According to him, Buhari has not only initiated the Anchor Borrower Programme, he has also demonstrated leadership by giving it tremendous support that has made it possible to display gigantic rice pyramids in Niger, Kebbi and Gombe States, and to gather in Ekiti to launch the Ekiti State Rice Pyramid Project.

He said, “The novel success we have recorded in rice production as a nation in the past five years is evidence that we have the capacity as a nation to feed ourselves and turn our economy around. It is also proof that the President Buhari Administration means well for the people and the nation.

Oyetola congratulated Governor Kayode Fayemi on the unveiling of Ekiti State Government Rice Pyramid Project, saying “If agriculture worked for us as the mainstay of the nation’s economy in the First Republic, it will I work for us better now in the knowledge- and technology-driven 21st Century. We must all at the Federal, State and Local levels muster the political will to give agriculture its pride of place as a staunch source of food sufficiency and security as well as an employment generation and revenue earner.

“I commend the Ekiti State Government, RIFAN and all our rice farmers for rising up to the challenges of 2020, including the Covid-19 pandemic, and for putting all the requisite measures in place for a bountiful yield during the 2020 Wet Season Harvested Paddy.

“I urge all stakeholders to continue to engage meaningfully in research and training and re-training of personnel to build capacity for optimum results. We will also do well to provide all the necessary implements and support for our farmers to perform to their optimum.”