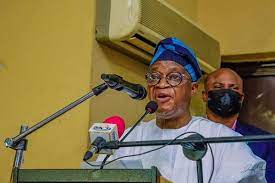 The Osun State Government has announced the recruitment of 1,000 teachers into public schools across the State.

The announcement was said to have been made after the scrutiny of over 11,068 applications from teachers who participated in the interview.

Through a statement released on Thursday and made available to newsmen, the Commissioner for Education, Folorunsho Bamisayemi stated that the shortlisted teachers scored a cumulative of 50% and above during the proficiency test to qualify.

“The Ministry of Education informs the general public particularly applicants for the teachers’ recruitment exercise that the list of successful applicants who scored a cumulative of 50% and above in the test and proficiency interview conducted is ready.

“A total of 11,068 applicants participated in the interview out of which 3,170 applicants scored 50% (cumulative) and above.

To ensure the sustainability of remuneration, the recruitment will be done in batches hence it is out of the 3170 applicants that the first combined list of 1000 most successful applicants will be drawn in 6 critical subjects of English, Mathematics, Biology, Chemistry, Physics and Agriculture.” he said.

He further disclosed that the list will be out in the public domain by next week while subsequent batches will follow later.