Abramovich, others suffer chemical poisoning during…

Osun State Government has disclosed herders across the state would begin going about with means of identification and that before operating in Osun, the herders must register with the state government in line with measures aimed at checkmating incursion of bandits, killer harders among others into the state.

Towards achieving this, the government said it would ensure data capturing to enhance proper profiling of herders residing in the state as part of efforts to strengthen cordial relationship and peaceful co-existence between the Fulani/Bororo herders and Yoruba crop farmers.

The government also announced its readiness to begin massive enumeration and headcount of migrants and immigrants in the state and that more measures would be taken in preventing incursion of killer herders, bandits and others wreaking havoc across the country.

As said, the decision was reached after a meeting convened by the State Committee on Peaceful Co-existence Between Fulani/Bororo farmers and Crop Farmers held with the heads of Fulanis and Bororos known as “Serikis” at the Conference Hall, State Ministry of Agriculture and Food Security, State Government Secretariat, Abere, Osogbo. 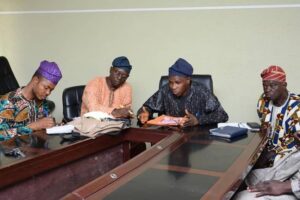 Addressing journalists shortly after the meeting, the committee’s Chairman, Hon. Mudasiru Toogun, said that the decision was necessary as part of efforts to update the statistics and data of immigrants living in the State, adding that the initiative would help to determine the population of immigrants so as to prevent any form of security threat that may arise from unchecked influx of migrants.

Toogun noted that the initiative would further help to give the government insight into necessary infrastructural facilities needed to support the Fulani and Bororo immigrants living in the State.

The chairman who applauded participants who were largely heads of Fulanis and Bororos said that the Governor Gboyega Oyetola-led administration would leave no stone unturned to ensure peaceful cohabitation between Yoruba farmers and Fulani/Bororo herders.

He said that the initiative was in furtherance of the government’s concerted efforts at sustaining the status of Osun as the most peaceful State in Nigeria.

Toogun said that the state had worked out a modality to begin the issuance of identity cards to Fulanis and Bororos living in the State as a means of identification, confirmation and authentication, saying the initiative would further help to stem the tide of incessant security challenges in the State.

Acording to him, the initiative would go a long way to help separate ‘wheat from shaft’ and flush out the bad eggs among them. He said that the state was resolute to curb the influx of illegal and unregistered herders migrating into the State as borders would be policed against incursion.

Toogun who described the continued peaceful coexistence between Yoruba farmers and Fulani/Bororo herders as commendable, noted that it was worthwhile that Osun didn’t experience any form of clash despite the reported clashes in some parts of the country.

He, therefore, urged the participants at the meeting to continue to display Omoluabi virtues which they are known for by being obedient to regular tax payment and good conducts.

“The essence of this meeting is to meet our people — the Fulani/Bororo community in order to sensitise them on the need to continue to strengthen the existing bond of unity, peaceful coexistence and togetherness. As we all know and as reported in the media, some states in the country are facing serious security threat resulted from Fulani-Bororo and Crops Farmers crisis. As such, we felt it was necessary to convene this meeting to further strengthen the bond that binds us together as brothers and sisters.

“The Government has resolved to commence the enumeration and headcount for the immigrants, particularly Fulani-Bororo headers living in the State as part of efforts to fight against insecurity. This initiative would also help to ensure easy planning since we know their number. It will be easy for government to know the kind of facilities they need in terms of infrastructure. Since we know where they are, it will also be easy for us to relate with them much better than before and encourage them on the need to pay their taxes regularly.

“This step will also help us to identify the number of their cattle since all the information about each and everyone of them will be captured in the database and if anyone commits any crime, such fellow will be easily tracked and punished. With the support of Mr. Governor, we shall begin the exercise soon. We have engaged the service of experts to actualise this dream as this will involve the inter-ministerial support of Office of the Statistician-General, Ministry of Agriculture and Food Security, security agencies among other stakeholders,” he added.

On his part, the state’s Seriki Fulani, Ibrahim Babatunde, assured the government of total compliance with relevant rules capable of sustaining the bond of unity existing between them and Yoruba crop farmers.

He sought for further support from the government, noting that his people would continue to live and relate peacefully with the people of their host communities.

Just In: Judiciary workers call off strike after downing tools for 8weeks