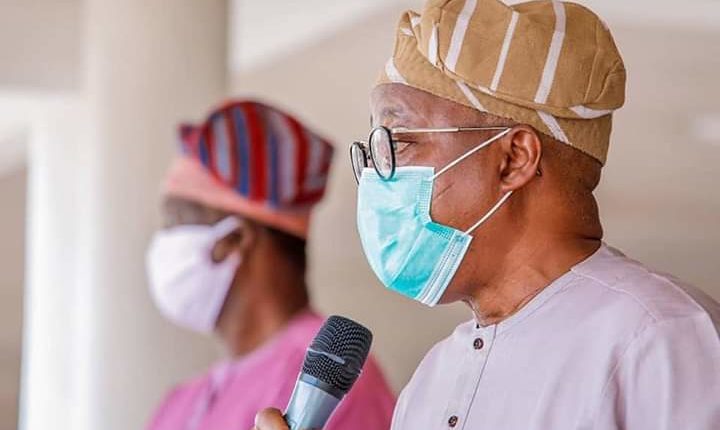 Share
By Monsuru Olowoopejo
Following persistent reports of kidnapping, cultism and other illegal acts in Osun State, the Government has inaugurated a Joint Task Force (JTF) with a mandate to go after the perpetrators and arrest them for onward prosecution in the state.
The State Government added that the JTF  further provide operational support for Amotekun, the state security apparatus, when it is finally commence operation within the state.
Security operatives involved in the new Taskforce were the Nigerian Army, Nigeria Police, Nigeria Air Force, Directorate of State Security (DSS), National Security and Civil Defence Corps (NSCDC) and the Nigerian Immigration Service.
Inaugurating the JTF on Tuesday, the state Governor, Gboyega Oyetola, while addressing the various law enforcement agencies that made up the security team on Tuesday, disclosed that the aim behind the JTF, at a time when the state is battling with coronavirus, was in furtherance of his administration’s commitment to rid Osun of all criminals.
While arguing that JTF would assist the government to guarantee security and safety of the residents, the governor stated that the team will kidnappers, cultist and Illegal miners in the state.
“Security is key to all we do as a government because it’s only in a secure atmosphere that our Development Agenda can be achieved and our outcomes protected. We’ll provide adequate security for our economic and investment programmes so that our vision to turn Osun into an economic hub can be realised”, he added.
To sustain the momentum within the state, Oyetola hinted that plans for Amotekun has not been shelved, saying, it shall provide operational support for Amotekun to fight cultism, kidnapping, illegal mining and other related crimes.
Worried by divisiveness and other actions that could cripple the aim behind setting up of the team during enforcement, the governor tasked the team to embrace the tasks with sense of patriotism, integrity and diligence.
“I also enjoined you to work together as a team and eschew all acts that can compromise the call and effectiveness if this team, including bribery, corruption, high-handedness and executive recklessness”.