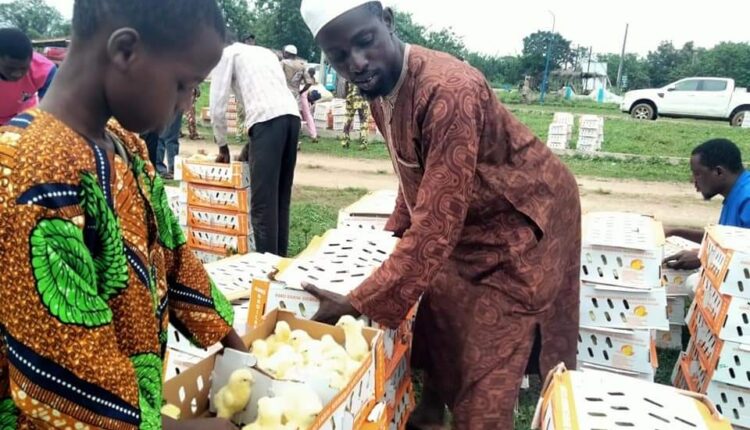 The Osun State Government has commenced massive distribution of chicks to livestock farmers in the state as part of efforts to reposition agriculture, ensure food security and empower young farmers across Osun.

Aside from the chicks, the state government also commenced massive distribution of feed-mills, vaccines and drugs to farmers, an effort geared towards enhancing their production capacity.

The initiative was anchored under the Osun Broilers Outgrowers Production Scheme (OBOPS-III), aimed to eliminate poverty and enhance production capacity of the livestock farmers in the State.

No fewer than 100 farmers benefitted from the first phase of the distribution exercise as each of the beneficiaries took home 2000 day-old chicks.

Beneficiaries of the initiative lauded Governor Adegboyega Oyetola for his administration’s efforts at revitalising the state’s agricultural sector through numerous interventions and implementation of farmers-friendly policies.

While flagging off the distribution exercise at Ara Junction, Ede on Tuesday, the state’s Commissioner for Agriculture and Food Security, Dayo Adewole, said that the initiative was designed to support farmers particularly the youth and women who could not afford to secure the chicks.

Adewole who was represented by the Director of Livestock Services, Osun Ministry of Agriculture and Food Security, Amos Daramola, said that adequate vaccines, drugs and feed-mills that would be enough to last between five and six weeks had been put in place for distribution to beneficiary farmers.

The commissioner who described the initiative as a veritable tool to eliminate poverty, hunger and the scourge of unemployment in the state, said that the scheme would go a long way to further attract and encourage the young ones to agriculture particularly livestock production.

While reiterating the administration’s commitment to revamp the agricultural sector, Adewole noted that efforts were tailored towards tapping and advancing the numerous opportunities embedded in the scheme having identified its potential to enhance the goals of the livestock farmers.

He urged the beneficiaries of the scheme to avail themselves of the multifaceted advantages in the initiative. In their separate remarks, some of the beneficiaries who expressed satisfaction and delight at the kind gesture extended to them by the government, promised to justify the purpose to which the programme was implemented

Nurudeen Ibrahim and Oguntuwase Adenike registered their profound gratitude to the government for prioritising agriculture and welfare of farmers in the State.

The duo who lauded the state government for redefining the OBOPS initiative noted that the government had made the scheme to become more lucrative and enterprising for livestock farmers in Osun since inception of the present administration.