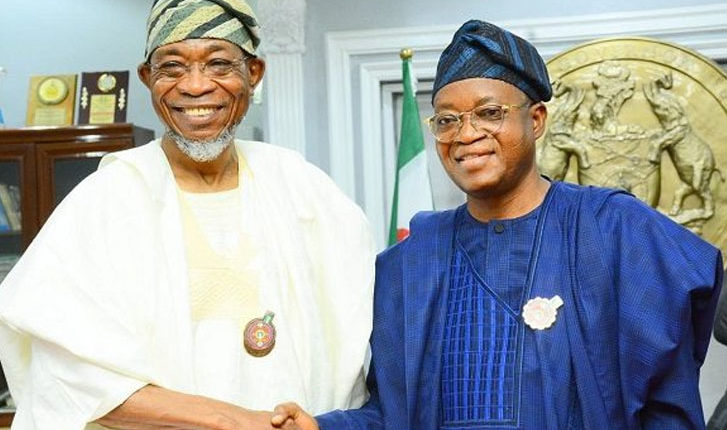 Share
The crisis Between Governor Gboyega Oyetola and his Predecessor, Ogbeni Rauf Aregbesola is said to be escalating every day. Day in day out, the duo and the behemoth of Psycophats that are said to be acclaimed “Political Hallelujah Boys” continue to add Salt to the already existing wounds.
The ember of discord has been spread like a wildfire. Some of those who have once eaten crumbs from Aregbesola and fed from fats of his cabinet when he was the Governor now sees Ogbeni as a Man they can hurl derogatory statements at without considering their past.
Some of those with little or no Political antecedent and good Lineage continues to drag the names of Ogbeni in mud as a result of the Crumbs they Feed upon from Oyetola Cabinet.
They have forgotten that Directly or Indirectly Aregbesola was once a Benefactor to their Principal.
The Embittered Aregbesola TOP Caucus also believes that they have been sidelined by Governor Gboyega Oyetola in the Scheming of events in the State. Oyetola “ILERIOLUWA” Structure is being funded massively as the Governor believe he needs a Good Structure ahead of 2023. By and Large, The Internal wrangling within the All Progressive Congress is apparently clear that if this Continues, the All Progressive Congress might lose the Gubernatorial Election that is meant to hold Next Year.
Also, Baba Kabiru and Oyetola should at least for the sake of the Party bow down their ego. Aregbesola is a Former Boss to Oyetola and to a reasonable extent, Oyetola should give him the needed respect that he deserves. Some set of Media rats attacking the Person of Aregbesola should be given the order to sheat their sword by Oyetola. Oyetola should see beyond Having Former Deputy Governor of the State, Senator Iyiola Omisore in his house. The duo should learn from the calamity that befalls Oyo All Progressive Congress during the 2019 Election that culminates in the Party losing the Election in the Poll.
It’s apparently clear that Baba Akande who is dubbed as the Leader of the Party in Osun after series of meetings with the duo doesn’t have what it takes to settle the discord between the duo.
As much as I will like to say, Oyetola needs Aregbesola at this time.
The Psychophants that surrounded him might have told him Aregbe is a Paperweight Politician but only a Daft and a Baby Politician will prefer to have someone like Aregbesola as an arch-enemy as the Election draws nearer. The Governor have a Long Walk to settle the internal rancour in the party by shifting ground and finding a common room for reconciliation with the Like of Fatai Akinbade, Moshood Adeoti, Rt. Hon Najeem Folasayo, Kolapo Alimi, Wale Alabi, other Critical TOPS Stakeholders and a host of others.
The Governor, if he cares to listen, should understand that a nation divided against itself can never stand. The Notion of Godfatherism cannot and never be removed from Politicking if the Governor and his Cronies care to hear.
Baba Kabiru should understand that if care isn’t taken, all that he has laboured for as one of the Founding members of the All Progressive Congress might crumble within a twinkle of an Eye and find common room to shift grounds for Governor Gboyega Oyetola. Regardless of how much the enmity seems to be like, the Former Governor’ of Osun State should see it as one of the Dynamics in Politicking.
This evening, on checking one of the Updates about sudden ineffective usage of “FREEDOM PARK” in Osun State by Wale Alabi, An Acclaimed Political Hallelujah Boy find it Worthwhile to refer Aregbesola as “A FOOL” while another Psycophats referred Oyetola as “AJOGUN EWU/IGBIN IRAGBIJI”. The show of shame by the supporters of the duo won’t make you, it will only mar them.
Just like Seyi Makinde, Ditto Oyetola. The duo Look Cool but they are a tough and hard nut to crack. The just-concluded 30th Years Anniversary of Osun State would have to be the best avenue to settle any rancour between the duo when the State Government decided to honour some Distinguished son of the Soil. Nothing stop Governor Oyetola from making Aregbesola one of the Awardees as the Longest serving Governor in the State. It could have been a better way to settle the wrangling between them but the set of Advisers surrounding the Governor just told him what he want to hear not what he is meant to hear.
On the final note, Oyetola being the Governor of the State should as a matter of Fact shift grounds for the TOPS Members and give room for Peace. The signing of Senator Iyiola Omisore into the Progressive fold in Osun and having an edge on the just-concluded Congress is not enough to be re-elected again. He should see beyond the Praise singers tantrums or they both learn in a Hard way.