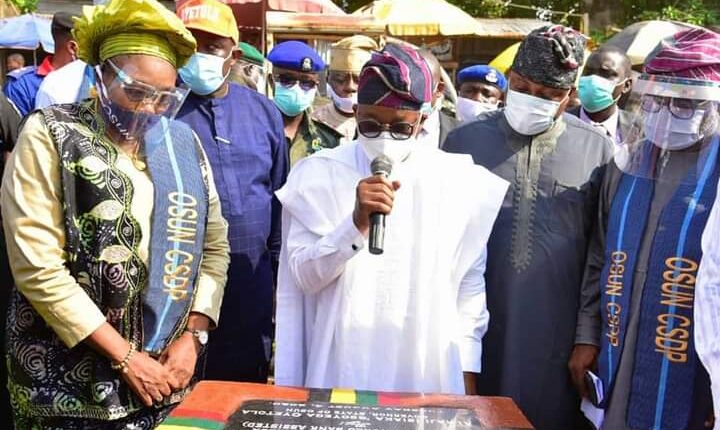 In fulfilment of his campaign promises, Osun State Governor, Adegboyega Oyetola,  has flagged off reconstruction of N200 million Atakumosa market in Ilesha town, as part of his plan to boost the state”s Gross Domestic Product (GDP).

Oyetola stated that reconstruction of the market razed by fire would contribute effectively to the socio-economic and commercial activities, thereby, boosting the state annual GDP.

At launch of first phase of the market reconstruction yesterday, the governor assured traders that the reconstructed market would have modern facilities including boreholes, toilets, and waste bins, to meet international standard.

He noted that the efforts by the government through the state’s Community and Social Development Agency (CSDP), would bring succour to the displaced traders after suffering huge financial losses when fire razed the market and destroyed goods worth millions of naira.

“As our contribution to the ongoing initiative, our Government shall in addition to this CSDP assisted initiative, build another 250 stalls, which will be delivered before the end of this year.

“This project, which is supported by the Osun CSDP will see to the construction of a total of 400 stalls comprising lock up shops and open markets with boreholes, toilets and waste bins to meet international standard”, the governor added.

Oyetola, who expressed his delight at impact his policies and programme was already having on citizens, assured residents that the Osun Development Agenda was designed to cater for citizens’ welfare and boost standard of living in the state.

He noted that the market reconstruction project was an indication that the agenda was centered on the citizens’ development, saying, Atakumosa market was gutted by fire that destroyed traders’ valuables and means of livelihood.

“Second, the incident was very painful in view of its devastating effect on the livelihood of the masses in the market. The effect is better imagined.

“I am, therefore, happy that, today, we are able to fulfil our electoral promise, as well as our role as government to provide security and welfare for the people by kick-starting the first phase of the reconstruction of the market which is worth about N200million. This will bring relief to our poor and vulnerable market men and women in Atakumosa market when completed”, he added.

Aside from the construction, the governor also presented cheques to 10 groups of traders, as an intervention fund to aid their post-coronavirus recovery in the state.

“At this juncture, I must remind us all and in particular the beneficiaries of this intervention that part of today’s project adopts Community/Group Driven Development (CDD) approach, which means you are the drivers of this market reconstruction project.

“I urge you to continue in this laudable lane as you cannot afford to fail in this enormous assignment, which is the way to go in this challenging period”, Oyetola added.