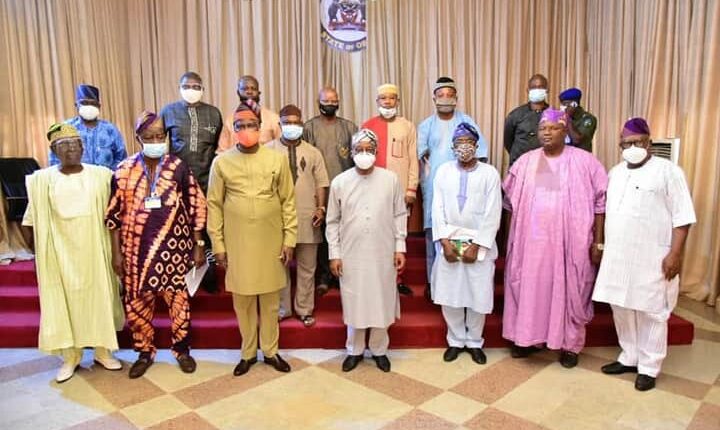 Share
Ahead of the Ondo gubernatorial election scheduled for October 10, Osun State Governor, Adegboyega Oyetola, and All Progressives Congress (APC) Southwest caucus, met and discussed strategies the party should adopt to retain the state.
Oyetola, a member of the APC caretaker committee, during the meeting, briefed members on efforts currently being made by the Mai Mala Buni led-committee to ensure a successful national convention.
The members of the caucus present at the meeting held at the Osun statehouse yesterday had in attendance representatives from Ondo, Ekiti, Oyo, Lagos, and Ogun states.
Addressing newsmen after the meeting, Oyetola further disclosed that the meeting afforded parties present opportunity to review the APC’s activities within the region as the party moves to cement the ties among members.
The governor added that aside from the meeting affording everyone present opportunity to suggest efforts that can be embraced by APC to achieve victories in future elections, it also provided a platform to examine approaches to forthcoming National Convention.
“Today, I hosted the All Progressives Congress, APC SouthWest Caucus meeting, where we reviewed activities of the party in the region, and resolved to ensure our party retains Ondo after the governorship poll in October.
“The meeting also afforded me the opportunity to brief the caucus on the agenda of the Caretaker/Extra-ordinary National Convention Planning Committee and map out strategies on how to approach the forthcoming National Convention.
“l wish our delegates from Ondo, Ekiti, Oyo, Lagos, and Ogun journey mercies back to their respective destinations”.