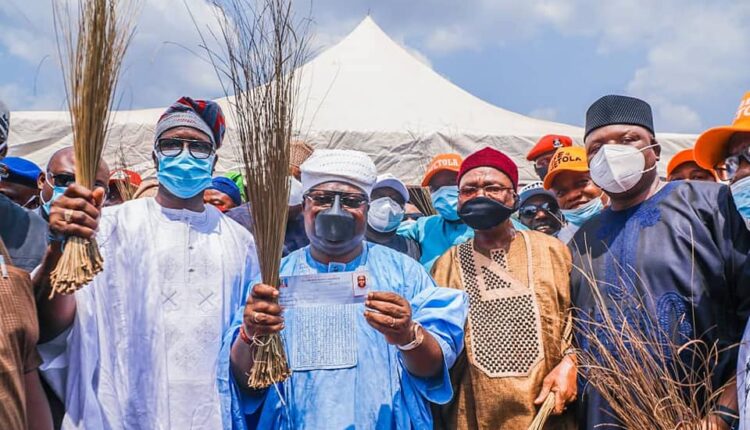 The former Deputy Governor of Osun State, Iyiola Omisore, has dumped the Social Democratic Party (SDP) for All Progressive Congress (APC) weeks after meeting with the incumbent Governor, Gboyega Oyetola.

Omisore, who was also a former lawmaker formalized his membership of the ruling APC after registering with the party on Monday at St. Gabriel Polling Unit 003, in the Ife-East Local Government Area of the state.

Recall that the former Chairman, Senate Committee on Appropriation, had in 2002 defected from Alliance for Democracy, the political platform on which he was elected Deputy Governor to former Governor Adebisi Akande.

Omisore, who was the Social Democratic Party (SDP) governorship candidate in the 2018 governorship contest, had recently met Oyetola, where the duo discussed extensively issues bordering on governance, insecurity, and recent crisis, including EndSARS protest and brewing ethnic crises.

Speaking after his registration, the ex-deputy governor said that the decision to join the ruling party was taken in the interest of the progress and development of Osun.

The former lawmaker said his defection was also informed by the tremendous achievements of the Oyetola’s administration, adding that he was convinced Oyetola meant well for the state and its people.

In his remarks, Oyetola who described Omisore as a patriotic Nigerian and a loyal politician said that his decision to join the ruling party has justified his love and passion for the progress and transformation of the state.

The governor who was represented by his Deputy, Benedict Alabi, expressed confidence in the ability of the former deputy governor to give his best to elevate the party.

According to him, Omisore’s journey to APC started in 2018 when he displayed a high sense of sportsmanship to support the progressive party during the guber polls.

“Omisore has no doubt displayed a high sense of sincerity and honesty”, Oyetola added.

Welcoming Omisore formerly into the party, the Osun APC Caretaker Chairman, Gboyega Famodun, assured Omisore of equity and fairness in the management of the party, adding that his formal defection to the ruling party had confirmed his passion and love for the progressive government.

“I use this opportunity to congratulate the people of Ife and Osun in general and to formally welcome our Senator into APC. What he has done today has finally put to rest the insinuations that he is not part of us.

“This will be the beginning of a new dawn in our party and our dear State. We are happy to receive him warmly into the progressives’ family,” he added.