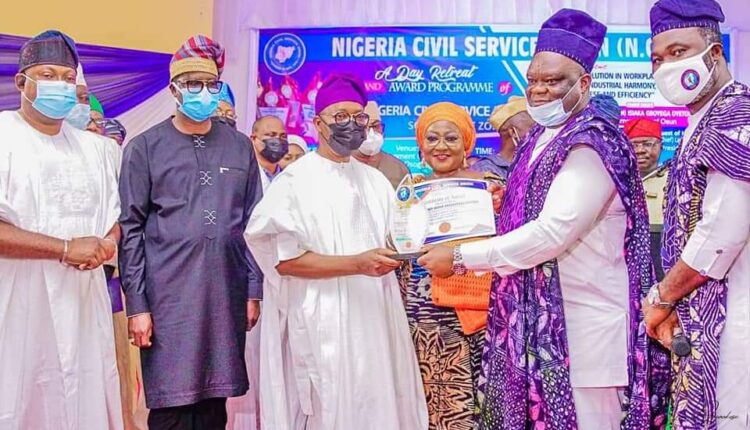 The leadership of the Nigeria Civil Service Union (NCSU) has commended the administration of Governor Adegboyega Oyetola of Osun State for continuously taking the welfare and general well-being of the residents, particularly workers, as priority since assumption of office.

The Union also applauded the governor for restoring the lost hope of the workforce in the state through the prompt implementation of his workers-friendly policies and programmes that had corrected so many lapses of the past.

The members of the union consequently threw their weight behind the governor and endorsed him for second term, saying they would do all within their powers to re-elect him for giving them the best place they deserved as proletariats.

This is even as the workers recognise Oyetola and honoured him with the Workers-Friendly Governor Award as a symbol of appreciation of many of his efforts to advance the cause of workers in the country at large and Osun in particular.

Speaking on behalf of the union at a One-Day Retreat and Award Presentation of the award of Nigeria Civil Service Union Southwest Zone, held at the Staff Development Centre, State Government Secretariat, Abere, Osogbo, the union’s National President, Comrade Lawrence Amaechi, lauded the tremendous achievements the administration had recorded in the last two and half years.

Amaechi, who described Oyetola as the best among the equals in the country, noted that the union would continue to be grateful for the good gesture the administration had extended to workers so far.

According to him, it was good to celebrate the inimitable hands of fellowship being extended to workers in the state by the Oyetola- led administration.

“We have been following the progress of Union across the country, and Osun stood out as a State where the welfare of workers was attended to without negotiation. We are grateful to you because you have done very well since taking over leadership responsibility. We know what you inherited, but today, the story is different because workers across the State are happy.

“You are not among the bad leaders we have in this country. You are a good man. And when a good man leads, people’s lives get better. It is on record that Osun is among the states where we didn’t negotiate before the minimum wage was approved and paid to workers.

“I give kudos to the Governor for keeping faith with the workers’ welfare. I was here few years ago, but I couldn’t see smile on the faces of our colleagues because they were being paid half salaries and owed. But we thank God that today they receive their salaries and pensions in full.

“It is in recognition of this that we were resolved to give you an award because of your good deeds and excellent performance across sectors of the economy. I am here today to join my members not because of anything but because you have demonstrated leadership that caters for the interest of all, most importantly the workforce,” he added.

In his acceptance speech, Oyetola appreciated the leadership and members of the Union for being supportive of his administration since inception.

He also commended Osun workers for their high sense of diligence, commitment, loyalty and passion for the government as being displayed in their collective quest to move the state to greater heights.

“I appreciate the National leadership of the Nigeria Civil Service Union for the visit and welcome you formally to Osun. I equally thank you for choosing Osun as the host for your Southwest Zonal Meeting.

“As a government, we have been enjoying the hands of fellowship from our workers since we came on board and I must confess to you that I am overwhelmed by the show of love which you all displayed.

“As you all know, our government has been fulfilling its promise made to ensure the payment of full salaries as and when due. We have also not failed in our responsibility to ensure payment of full pensions and gratuities regularly since 2018, including gradual clearing of the backlog of arrears inherited.

“We have provided robust Health Insurance Scheme for our workers and our Administration has also upgraded over 200 members of staff of UNIOSUN Teaching Hospital just as we also pardoned 962 civil servants who had been pencilled for demotion for embarking on further studies without approval.

“And above all, we are paying Minimum Wage despite the obvious economic challenges in the country. These and many others are being done by our government to show that we value our workers and will never do anything to undermine their welfare.

“We are going to do more for workers. You have demonstrated that you are good partners in progress. I am very honoured today by the presence of your members who came from far and near. It is therefore a very cherished honour that will no doubt continue to boost our resolve to constantly put our teeming workers first.

“I wish to, once again, thank you all for finding me worthy of this honour. It is a call to do more for our hardworking workers and for the people of our great state. I shall not disappoint you,” he added.

He therefore dedicated the award to the good people of the state, particularly workers for their unflinching and unalloyed support.

Earlier in his welcome address, State Chairman, NCSU, Comrade Abimbola Arapasopo, commended the Governor for being faithful to his electioneering promises made to reposition the civil service and make life meaningful and worthwhile for all categories of workers in the State.

Arapasopo who acknowledged the Governor for doing great things out of the obvious meagre resources, noted that the Adminstration has been doing excellently well in all spheres of life.