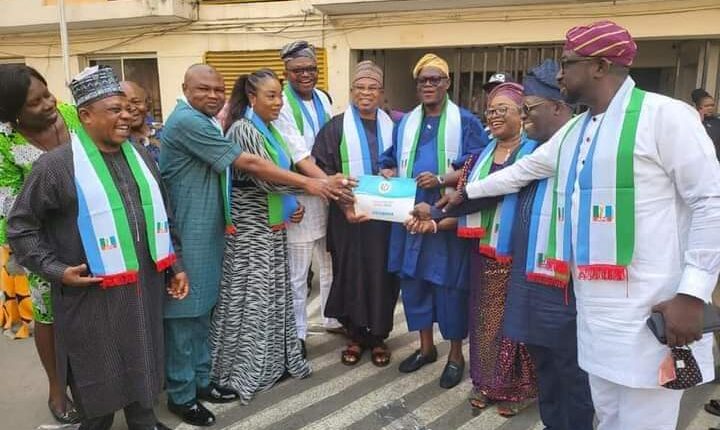 The Senate spokesperson, Ajibola Basiru, representing Osun Central Senatorial District, as well and other top political members from Osun State chapter of All Progress Congress (APC) have picked a nomination form for the state’s Governor, Adegboyega Oyetola, who they claimed deserve another term in office and re-election at forthcoming governorship poll in the state.

The APC’s other members including Ajibola Famurewa, Taiwo Oluga, Seun Odofin, Nike Omoworare, Bukola Oyewo among others who also joined Basiru in picking the form, indicated that the gesture was a demonstration of their collective satisfaction with Oyetola’s administration performance in all ramifications and that giving him the opportunity to serve another term in office was in the best interest of entire Osun’s indigenes and residents that have to continue commending the governor on infrastructural projects, poverty alleviation programs, and others.

Speaking after picking the form at the APC’s secretariat in Osogbo, on Tuesday, the senate spokesperson stated that the form was a token from himself and other members to show their appreciation of Oyetola’s efforts toward state growth and for being proud of the achievement of the present administration.

Speaking on the form purchase, the Chief Press Secretary to the Governor, Ismail Omipidan, in an exclusive interview with The Guild, described the members’ action as a welcome development and indicated that the people have trust in Oyetola’s administration.

Omipidan added that they have seen what the governor has done after he was sworn in, particularly in healthcare, agriculture, security, and others which have boosted the standard of living of everyone living in the state.

He noted that unlike what many had believed that whenever it was election season, governance suffer, the Oyetola’s administration has promised to work and deliver all projects promised.

According to him, the governor while delivering his 2022 new year message, announced that the state would be converted into a construction site within the early part of the year in order to make use of the dry season.