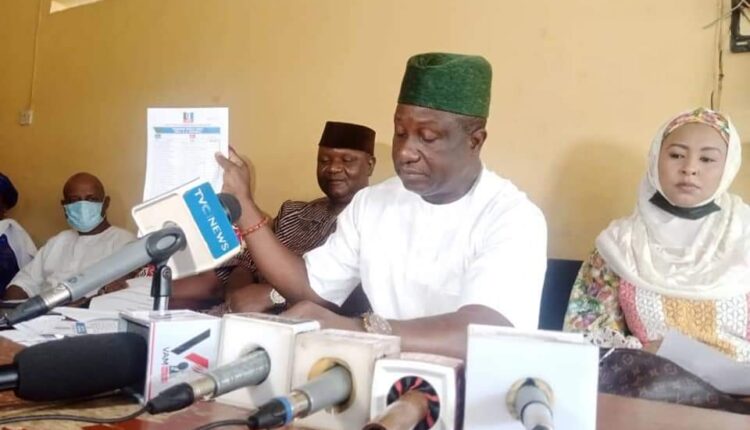 The National Committee for Local Government Congress of All Progressives Congress (APC) in Osun State has announced results of the congress held in all the 30 Local Government Areas and One Area Office and faulted parallel exercise in the state.

It explained that contrary to insinuations from some quarters, there was only one congress conducted by the committee appointed for the task from the national level, adding that the claim were handiwork of mischief makers in Osun.

The Committee Chairman, Hon. Gbenga Elegbeleye, who announced the results at a press conference in Osogbo on Monday, disclosed that the results were compiled and announced in line with the constitution of the party, having satisfied all the constitutional requirements and party’s principles and guidelines.

He also reiterated that there was no congress in Osun other than the one the committee conducted and that was monitored by officials of the Independent National Electoral Commission (INEC) and security operatives.

Elegbeleye, therefore, described as illegal, null and void results of any other purported congress held in the State. He added that the committee was sent by the national secretariat of the party to conduct LG congress for Osun APC and not a group within the party.

According to him, the committee was not informed of any other Congress except the one its members witnessed and supervised across the State.

Elegbeleye who described as fallacy, the purported claims of another congress held by some members of a group in the party, said “an election can only hold if the dissenting members sufficiently and appropriately informed the Committee of the need to do so”.

He added that “the committee resolved to hold a Stakeholders’ meeting as part of efforts to register their presence in the State, ratify the decision of the leadership of the party as to either a consensus arrangement or election would be adopted and inform any member or group of people in the party who may opt for election the need to do so having properly being informed as the case may be. We have the results of the 30 Local Government Areas and Ife-East Area Office with us. We were here yesterday for the compilation of the results coming from the Local Governments.

“As you all know, we are here to conduct the Local Government Congress for All Progressives Congress (APC) in Osun State and not for any group. We were sent by the National Secretariat, Abuja to come and conduct Local Government congress for APC in Osun and not for a group or members of a group in the party. And not a single member of this committee is aware of any group in the party as being speculated.

“We were here last Friday to hold Stakeholders’ meeting where we had leaders of the party. So also today, as you can see, we equally have leaders of the party here present for the Press Conference. In our visit to some of the local government areas, we couldn’t see any other place rather than the designated centres where the Congress was supposed to be held and nobody contacted us in contrary. Nobody or group of persons informed us there will be Congress elsewhere.

“As far as we are concerned, none of the Committee members was informed of any other venue other than where the exercise was genuinely held across the State. We are seven in number and all of us are here. We all witnessed the election. Myself and my colleagues use this opportunity to thank members of the press and the party’s leadership in the State for your cooperation and support and for the peaceful conduct of the Congress. I believe that the APC in the State now have the new executive members at the various Councils to pilot the affairs of the party for the next four years,” Elegbeleye said.

When asked if the Committee was aware that some members of the party agitated for election instead of consensus which was largely adopted by the leadership of the party, the committee Chairman said that during the Stakeholders’ meeting, there was no motion against the popular consensus adopted by the party.

He added: “On Friday, we held a Stakeholder’s meeting and I said the party had opted for consensus but in area where there are disagreements and people want to really go out and vote, they are so much allowed and for someone to insist that he won an election, he must have notified us that in a particular area they want to vote, and as I said, nobody, I mean nobody till now gave us any notification of any other Congress elsewhere.

“Nobody notifies us they don’t want consensus, nobody notifies us they want election till this present moment. Nobody notifies us that there is a crisis in any Local Government that requires election. What we are not aware of, we can’t act on it. We are not from Osun and every member of the party knows the procedure, they know we are around. Nobody can claim that he doesn’t know we are around that was why a stakeholders’ meeting was held to further announce our presence. So, as far as we are concerned, any Congress outside the one we supervised, monitored and subsequently announced its results is a nullity.”

In his remarks, the Caretaker Chairman of the APC in the State, Prince Gboyega Famodun, commended the members of the Committee for ‘a job well done’.Famodun who expressed displeasure over the conduct of some members of the party, noted that “no pressure group in APC can equate its strength to that of the party itself that is fully registered and constitutionally constituted.”