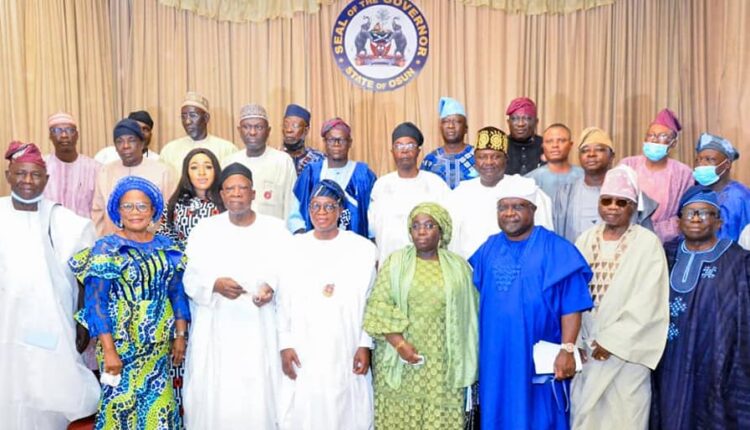 The All Progressive Congress (APC) has faulted claims that the ruling party was battling intra-party and leadership crisis, saying it was only focus on ensuring it consolidate on its achievement and retain the governorship seat during the 2022 gubernatorial election slated for this year.

This is as the leadership and members of Osun APC appealed to the National Reconciliation Committee to disregard whatever was contained in the petitions forwarded to it by the dissenting members of the party called “The Osun Progressives (TOP)” alleging leadership crisis within the file and ranks of the party.

The ruling party, which described TOP’s requests as self-serving, misleading, sarcastic, spurious and baseless, called on the committee to dismiss it in its entirety as it was meant to clandestinely destroy the corporate image of the party in the state ahead of the guber poll. The party’s position was made known when the committee met with the stakeholders of the party at Government House, Osogbo, yesterday.

Responding to some of the issues raised and prayers made by TOP members to the Reconciliation Committee, the Secretary, State Congress Committee, Sunday Akere, said that the allegation of alienation of party leaders was false, saying the present leadership structure was put in place by the former Governor, Rauf Aregbesola, and inherited by Governor Adegboyega Oyetola until few additions made just about few months ago.

On the allegation that Oyetola based most of its policies implementation and execution on the platform that ushered his emergence, Ilerioluwa, Akere noted that since Oyetola was elected governor, the party has taken the front burner in all decisions making and implementation.

Akere who noted that TOP was formed purposeful by those that believed in an “Audio”, saying the allegation of ‘sit-tight syndrome’ was not correct because the party leadership in adopting consensus as suggested, ensured that those that were not active or doing well in positions they were holding were replaced.

According to him, in the preparation for the just-concluded congresses, the governor and the party leaders carried everybody along and acted in conformity with the party guidelines and resolutions reached at all levels as the elections went smoothly in all the wards, local governments and state levels.

He called on the committee to ask the petitioners to produce those that screened their purported aspirants, conducted their congresses, officials of the Independent National Electoral Commission (INEC) that supervised their congresses, the security agencies present at the venue they claimed they used among others, as demanded by electoral guidelines.

Akere noted that the governor has no hands in the decision of the Appeal Committee contrary to TOP speculations, saying their decisions were based on facts presented before them.

“For TOP members to say they participated in the Ward, Local and State Congresses is laughable and it amounts to building something on nothing because they know there was no basis for such; and the allegation of nepotism leveled against the Governor is not only baseless but spurious. He who alleges must prove. All they wanted is juicy appointments.

“Their prayer asking the Reconciliation Committee to recognise their Congresses is misplaced and distractive because the Committee is to appeal to frayed nerves to give peace a chance and not deciding on the long-concluded Congress.

“The Committee should take note that, this so- called TOP members have constituted themselves into a team more vicious than the opposition. They don’t have respect for the Governor or the leadership of the party headed by Prince Gboyega Famodun. The manner in which they deride the programmes and achievements of the Governor shows clearly that some of them have made up their minds on leaving the party if they cannot get what they want.

“They are already holding meetings with the opposition and a faction of the said opposition in the State now takes the responsibility of protecting and defending them as a matter of life and death. The TOP members have no right whatsoever to dwell on issues that do not concern them as their demand for resignation of Mr. Governor from the APC National Caretaker Committee connotes.

“The Governor as the leader and father to all is always ready to embrace and welcome back those willing to retrace their steps. This Committee in the spirit of the minority having their say while majority have their way should appeal to TOP members to join hands with Mr. Governor in sustaining the progressive legacy in Osun State.

“And finally, this Committee should implore the immediate past Governor and current Minister of Interior, Ogbeni Rauf Aregbesola, to rein in TOP members because he publicly declared that he is their patron and and that he supports whatever they do”, Akere submitted.

Earlier, the Committee Chairman, Senator Abdulahi Adamu, noted that their presence at the government House was part of efforts to ensure fair hearing, equity and justice as it would serve as a forum for the party leadership to respond to and defend some of the allegations raised and petitions filed before it.

“You are aware that APC like any human endeavours has issues that are affecting the free flow of the affairs of the party, hence the inauguration of the Committee to restore peace. It is natural for human beings to have conflicts, but what is important is to resolve it.

“We are here to work for the unity, harmony and love within and among the party loyalists. When we came yesterday, our port of call was to visit Mr Governor to declare that we are at his domain. We have started to take requests, and we felt it was necessary to hear from you too. That is why we are here. We have served the copies of the petitions to the Governor. We expect to have some responses. Nothing is expected to be covered,” he added.

They passed vote of confidence in the Governor and the leadership and members of the party just as they described the congresses held in the state as most credible and acceptable by all, noting that the leadership of the party would not be distracted by any form of internal or external force.

Buhari’s elixir – Everybody must farm to save Nigeria